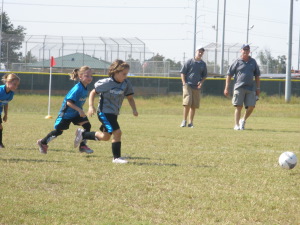 Soccer season is over.

Ainsley played on a local church league this year. No scoring, no winning, only one team to play against.

I think we’ll consider putting her in a competitive league next year. I see no point in pretending not to keep score. Our team knew we lost every single game.

Why do we keep insisting children are stupid or not paying attention? Why do we attempt to teach them the wrong lessons? We live in a Capitalist Society – if you think winning isn’t important here – YOU haven’t been paying attention.
Winning IS important and we should teach them how to try their best to WIN.

I did not coach because I think she is less inhibited and shy and has more fun without me there. Coaching my own kid was quite frustrating for me.

Soccer is MY favorite sport for girls because there is lots of actual exercise (unlike baseball with it’s endless waiting) and it’s gender neutral. 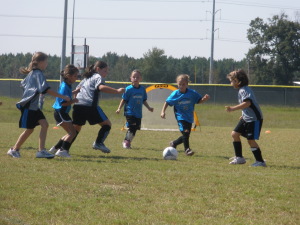 Also, I think Ainsley has an aptitude for it.

She says she wants to try gymnastics over the winter instead of going back to Taekwando. I’ll let her if it isn’t cost prohibitive.