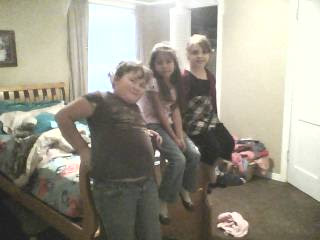 When I was a little kid my parents moved a lot. It was the 70s and 80s. When we moved to a new neighborhood I would go out and knock on doors asking,
Do you have anyone my age that I could be friends with?

Can you imagine letting your little kid go door to door in a neighborhood you just moved to? As I said, it was the 70s and 80s and things were different then.

We just moved to a new neighborhood and I caught a glimpse of a little girl around Ainsley’s age up the street.

We’re going over there to meet that little girl and make you a friend. Get your shoes on.

It’s okay to be scared. But, we’re doing it anyway. You’re brave.

Hi, this is Ainsley. We just moved in up the street. We thought she might be friends with you. What’s your name?

How old are you Bernice?

Are there other girls on the street to play with?

Nikki. She’s across the street.

Would you like to go over and introduce Ainsley to her?

And that’s how Ainsley had two instant friends in the neighborhood. I wish it was still that easy for adults to make friends.

How long would it take me to make the whole neighborhood Christmas cookies? Just because “people don’t do that anymore” doesn’t mean I shouldn’t right? I mean, if it was effective then . . .