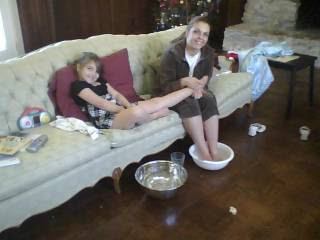 Sundays are for bonding and resting. Oh, and a spa manicure-pedicure in front of the tube.

Learn to groom, but be frugal about it. That’s the lesson here.

Ainsley bites her nails and lets her cuticles grow out to the point where a manicure is a big painful task. Turning it into a fun spa girlie time avoids the holding her down while she’s screaming as I push back the cuticles episode.

After the red nail polish, we add some Bite It. It’s supposed to stop her from biting the nails down to bleeding by making them taste like dirt. It’s probably more effective if you put it on more than once a month. I noticed this morning that she’s already bitten most of the polish off her nails.

. I would not care that she bites her nails if she were not complaining that they hurt from hang nails and infection quite often.

Do you allow your daughter to participate in grooming activities? (To be fair, we very democratically did Zack’s nails too.)

You'll Shoot Your Eye Out! Friend Finder
Scroll to top