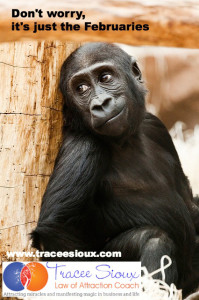 Got the Februaries? I bet you do. A case of the Februaries is sweeping the world over. I was editing my memoir, The Year of YES! last week and realized that February is when the shifting for the rest of the year occurred. I’m thinking this explains how Februaries usually go.

It’s a little dose of bleh, with a side of ugh, and a topping of seriously? Maybe you’re having the entree of lonely with an appetizer of sad, or a little sip of what might be depression, (but it’s probably not, it’s just February). You’re spending more time alone than usual and it’s pretty difficult to muster up the enthusiasm to go out on a Friday night and be cheerful and happy, and well, it just seems like a lot of work. And it’s so cold and dark, is it time for bed yet?

Why does February always have to be so February?

You spent January making choices about the direction of your life. You gave the Universe new directions. You said, “hey, I want this” and “yo, I don’t want this,” and “look, that’s the direction I’m going and I want to end up there” and “this is the new way I’ve decided to be now.” The call was “help me change my life.”

Which means in February the Universe, right down to the neurons in your own brain and the cells in your body, has to re-organize and re-situate to allow all of this “new” you’ve called in. You’ve required a “shift,” and in February the shift—especially the internal shift—occurs. New people position themselves around you, old situations either evaporate or acclimate to your new being, new choices nudge old circumstances out, expanded thoughts knock around limiting beliefs until they submit and give way.

Think about the mass consciousness shift that occurs with the New Year. The entire planet makes new choices and chooses new directions in the form of intentions, resolutions, annual budgets and goals. The Universe, has to move some things around to accommodate all of that new intention. It takes a minute. About 28 days to be exact, except on Leap Year when it takes 29 days.

Shifting isn’t the most comfortable experience in the world. But, if you want to get where you’ve declared you’re going, it is necessary. Often New Year’s Resolutions die in February because people get too uncomfortable and they cling to old ways, the way they cling to old smelly raggedy slippers. The Devil you know is “comfortable” because you’re accustomed to its awfulness.

Yep, those are the Februaries. You could fight it and try to muster up your ambition and get out there and drum up some kick ass and beat down the Universe’s door with this isn’t what I ordered, damn it!

But I don’t recommend it. It wastes too much energy and it will most likely be futile. You might try a tanning bed, highlights in your hair, a new sundress (yes, I totally bought a tiny sundress last week) and girls’ night out to try to perk yourself up. But, don’t be surprised when at 10 pm you long for your cozy bed.

Don’t cave under the pressure of February. Insist on your new direction and hold to your vision. A little passive stubbornness is all it takes. Or faith. Or you’re just too tired to resist the shifting. Either way. Just don’t give up. An enormous amount of work is taking place inside your Soul right now, it only looks like inert hibernation.

The best way to handle the Februaries is to sit back and let February do its thing. Have the cry, take the bath, stay in, curl up with a blanket, light a candle, sip some tea. Be still.

Soon enough, it will be spring and you’ll get a sudden burst of energy and you’ll be ready to birth whatever it is that you said YES! to in January.