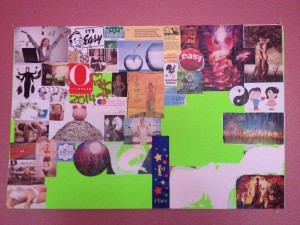 Dream Boards work. They just do. But, sometimes we can screw up the process by changing direction too many times.

This is why I’ll never make a dream board halfway through the year. It’s not that it won’t work in June, or that it’s more powerful in January. It’s that it will work in June. Likely before I’ve had time to manifest what I want.

I made choices in January. And unless every one of them has manifested by June—and my dream boards are a little too ambitious for that—you have to stick with your original choices for enough time to allow the Universe to give it to you.

I have a friend who made a Man Vision Board. She had this perfect relationship with this perfect mate in mind.

She started dating a man who was pretty close … but not quite. There were some deal breakers.

This happens. The Universe gets as close as it can as quickly as it can. Then you have to accept or reject it and give it further direction.

Well, instead of breaking up with this guy and telling the Universe more specifically how she wanted the next man to be, she trashed the dream board. And started over.

Did you hear that? She trashed her love life.

Which wasn’t necessarily the most effective thing to do because she still wanted a man with a lot of the original qualities on the first dream board.

And the results for the rest of the year were willy wonky and there was a lot of starting over that year.

I tried the same thing. I got freaked out last February and ripped some things off my dream board and filled it up with some other things. Weirdly, I got both things in some “indecisive” ways.

There’s a fine line between making adjustments and edits versus just trashing your intention and starting over.

How to Be More Creative