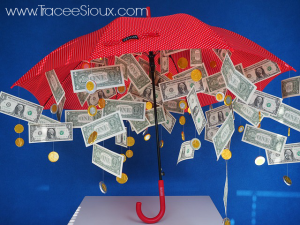 So you want to make $1 million dollars? And you keep affirming and visioning it. Why haven’t you manifested it yet?

Let’s put it in simple terms. You make $30,000 a year as an administrative assistant. You’re not doing anything differently in your life that might make $1 million come to you. You’re not writing a book which you expect to be an enormous success, you’re not investing in the stock market and you’re not poisoning your rich aunt.

The trick is to pick a number that you can believe in—even just a little bit. For instance, you might say, I want to manifest $60,000.

Now, $60,000 is believable to you because you know a lot of people who make $60,000. It’s double your current income, so it would be pretty cool and exciting, but it is still conceivable what you would do with that kind of money and where that kind of money would come from.

Importantly, if you want $60,000 you can probably think up tangible plans to move toward $60,000. You might have a business idea, or know of a class or two that will improve your skills enough to move up the corporate ladder a rung or two.

Once you start moving toward $60,000 then $60,000 moves towards you. Now, you’re not permanently stuck at $60,000. Once you reach that goal you can get incrementally specific again and start working on doubling your income. Then you’re at $120,000. Do that again and you’re at $240,000. Eventually you will be able to conceive of a million dollars if you use Law of Attraction and money with Incremental Specificity.

Want more great content like this about Law of Attraction and Money? Check out Maxcelerators and you can Maximize and Accelerate Your Results.

How to Make a Dream Board That Really Works