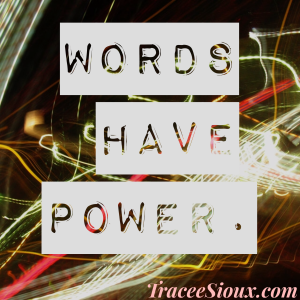 We say all sorts of things in our culture that carry a connotation which makes sense to us, but in terms of Manifesting it can have a negative effect.

Let’s take my Barbie razor scooter as an example.

Of course, I was trying to encourage myself to be gentle with myself and not put so much pressure on me in my really shitastic scary financial situation.

That was my intent.

But the Universe obeyed my words.

While rushing to the park one day I flew off a Barbie razor scooter and broke my clavicle. I gave myself a break.

Now many spiritual people will insist that you can create the intention and that it’s your belief about the word that makes things manifest. That if you just eliminate the belief then you’ll be okay if you use language that can be twisted into a negative outcome. That it’s the emotion behind them that cause things to happen or not happen.

But, I believe that words are the most powerful forces in the Universe. In Genesis the entire Universe is created with the Word.

Words carry their own vibration. They are a powerful collective agreement between millions and millions of Souls across time and space.

Words carry their own Intention, Emotion, History, Connotation, Denotation and Meaning. This can change and be altered, but not generally by one person’s intention alone. Because language is collective consciousness.

I guess what I’m saying is that while you might be able—with great effort—to neutralize a word for yourself, you can’t really neutralize the entire tradition of language and communication because words are their own energy. And they are a very, very powerful energy.

So, my advice, as a wordsmith and a publisher, is to be very conscious about what words you’re using. That’s one focus here at Sioux Ink when we publish a book. We look at the power of words and get really conscious about the words our authors are using so as to deliver the right message that will carry a high, healing vibration before we put it out into the world.

Law of Incremental Specificity in Law of Attraction and Money