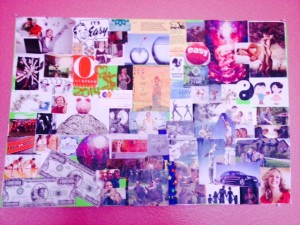 Have you examined and reflected on your Dream Board from 2014?

I going to share some results from people I know, clients, my family and myself to help you make an EPIC Dream Board for 2015.

First, to review last year’s board you have to see it with new eyes and figure out how things showed up in order to determine whether you really got what you asked for. This is useful to help you adjust course for 2015.

Look at your board to see if there are other interpretations the Universe might have made when sending you what you’ve asked for.

For instance, I’ve felt ungrounded and unsafe for much of the year. Looking at my dream board, I can see that one primary theme was to make The Big Leap. A concept I illustrated with a goldfish flying from a small bowl to a bigger bowl.

But the fish never lands in the big bowl. It stays perpetually in mid-air. I’ve definitely felt like this all year. I remember that over the year I’ve actually said the words, “I feel like I’m just hanging in mid-air, flopping in the wind.” I didn’t see this effect in January, but I can see it now, with the help of a friend who pointed it out. That’s why you don’t do this alone—even if you’re really really good at it. You need outside eyes with different perspective to get the best results. To resolve this for 2015 I have to find an image that illustrates “having already made The Big Leap and having already landed in the bigger bowl.”

Cash Flow is a Double Entendre

Another image I put on the board was of cash flying out of a laptop. I put it there to demonstrate that I wanted to create passive income with a program like Maxcelerators.

I did create Maxcelerators, but all the money went “out” as an investment in the program. Now I need to find an image that signifies money coming IN. In fact, as soon as money came into my life I invested it back into the business.

Easy, only not so much

Well, I put the word EASY on the board and then surrounded it with the most terrifying, hard things I could possibly imagine, including publishing my extremely exposing memoir, The Year of YES!, public speaking, stepping out in my business in a more visible way, taking my business to scary new heights and investing all my money. All terrifying. Pushing me to my fear limits. All giant cliff jumping. And at the beginning of the year as I pasted all of these scary, hard things on the board my Soul knew that I would have to learn to “take it easy” to get through it.

I can only believe that doing all of these things would have been so much harder and scarier, had I not claimed and declared that word over my year.

Another notable effect is the relationship corner of my board. At the beginning of the year I put only a few images on the board and didn’t fill space in. One couple signified a spiritual connection, another signified being grounded. And one of a couple traversing a mountain, signifying being on the same path. But then in February I freaked out about leaving the Universe too much room to fill in the gaps with the unknown so I put a bunch of images of couples doing different activities. Some symbolic and some literal. I got all of it, had every experience … with different men. There were different male models in each image. So I got the landscaping … but not from my boyfriend, which had been the original intention, but he was a boy and a friend. I got the sleeping, laughing, dancing, elevating, flying, being lifted up and support from a man in my business and professional life. All of it manifested. But not from one “boyfriend,” which was my original intention.

I was sharing this pattern with one of my clients and friends. She said she covers up the faces with hearts or words so that the Universe understands that it’s not these actual people but the concepts. Huh. Others I know have cut off the heads of models, but I don’t like the disembodied symbolism there. One woman I know met her Twin Flame in January right after she made her Dream Board … but she used only ONE image to signify Twin Flame and it was more conceptual. Their energy matches, but they don’t share the specific “interests and hobbies” she might have filled the board in with. Still, they’re happy and exploring new things together.

This year I’ll likely use one image that will be conceptual and you won’t be able to identify the faces, I’ll put a picture of my own face over the woman’s.

One thing I re-learned is that you can’t force things. By which I mean, if there are other factors at play … what your Soul truly wants for instance … you will find it frustrating to try to force it anyway. Case in point, my Soul made a declaration that I would be autonomous, single and sovereign for three years after my marriage ended. And she declared it in a book published for the masses, so it carries super-power. Trying to force the Universe to change course and give me a relationship at two years was ultimately futile and frustrating. It simply wasn’t what my Soul wanted, so it didn’t happen. It tried to happen, but my Soul pushed back and held it off.

2015 is the three year mark. So, the timing is better and it aligns with my Soul-level intentions.

Another pattern is what I refer to as To the Left. This happens sometimes. You put something on there that you think you want … and the opportunity presents itself … but you say no or you say, to the left.

For example, I’ve had an image of a backyard couch set on my Dream Board for years. This year, I was at a thrift store and sat down of weary exhaustion and realized I was sitting on my couch set. But, I’d been out all day and I was so freaking tired. I would have had to make two trips to the thrift store, in another town, to get the thing home and it would have cleaned out my bank account even though it was an exceptional deal.

I consulted Zack, a wise manifestor, who recommended we require the Universe to do better. To the left, Universe.

A friend put Peru on her Dream Board, but said no when she was invited on a trip with classmates. It just didn’t feel right.

A client put a $1 million company on hers, but the opportunity presented itself in a package other than what she really wanted, so she said to the left.

Either way, now is the time to course correct with heightened intention.

Lastly, there are two critical things I put on my Dream Board every year.

1. White Space. White Space is what is used in art to allow your eye to rest and focus on the really important things. Margins and paragraph returns are examples of White Space. The sky or background are examples of White Space in art. A rest or a guitar riff is White Space in music. Think about what a painting would be like if every inch was covered, a song without rests, a book without margins. Without White Space it’s not beautiful and pleasurable, it’s just too much busyness that sucks all the Joy out of the room, creating overwhelm and over-stimulation. Except last year I didn’t use White Space. I filled the whole sucker up from corner to corner. And I didn’t like it. There was too little room for the Universe to maneuver and I was far too busy. Leave blank space around what you want. Go minimalist. This allows you room to breathe and create. Creativity and productivity thrive on White Space.

2. Time. This relates to White Space, but I feel like Time needs its own Intention every year. How will you fill it? Who will master it? What will you do with it? How much of it will you give yourself? I have Einstein Time on my 2014 board. It’s the concept that allows me to expand time as needed. It’s critical.

What are your true intentions and how can you get the very best results? I want to support you in discovering what you want for your 2015. For only $222 for the whole year I’ll support you, give you all my secrets and my powerful teaching tools with Maxcelerator calls, a private FB mastermind support group, weekly challenges with low time commitments and high impact and every eCourse I have that will help you master time, relationships, meaning, Joy, money and Soul Purpose. I’m doing it for $222 because I want to help everyone. It’s a price that excludes no one who’s really intentional and committed to making 2015 the Year of YES! You choose how you live. And that’s a lot easier if you do it with intention and support.

NOW. 2015. There’s no time but now to make the commitment to live the way you really are meant to live, driven by your Soul Purpose. Say YES! to Maxcelerators, it will Maximize and Accelerate your results. You won’t believe what your life will be like in December. That’s a guaranty I feel confident making.

Like a Good Bra, You Need the Right Support

Dad makes more money than YOU!?!?!
Scroll to top