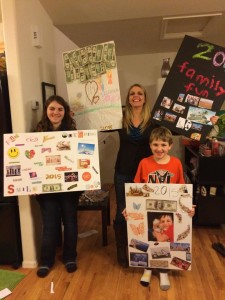 When I first began making my Dream Boards I put a bunch of things on it. We were broke and trying to make ends meet and things were in high demand and short supply. I wanted a real set of couches, a house, a car, some decent shoes, clothes, and friends.

The truth is, that’s what I really, really needed at that time in my life.

I manifested all the things on that board. My favorite part was the friends, of course. But the minivan on that board has been such a blessing too. And when I sit on my couches I feel a sense of joy that I manifested them. And living in this house is real.

Over time, the next few years, I would still put things on my dream boards, and I would manifest them. I got so good at manifesting things that I didn’t even need to put them on the dream board. I would just think, I want a blue wrap dress and my friend would hand one down the next time I saw her.

I’m a huge fan of manifesting things still. Because physical objects are good evidence that you’re manifesting what you’re trying to attract with Law of Attraction and money.

But, at some point it occurred to me that I should be able to manifest money just as easily. Ah but I have so many more issues to work out around money than I do couches and wrap dresses. So I continue to work with that and this year’s dream board has real money all over it. I’ve even been putting my savings on the board. There are seven 100 bills on it, plus 50s, 20s and 1s. And growing.

What I really want with the money is to feel secure. While I have attracted money the last several years I’ve been heavily investing it back into my business. Which is a good thing to do, but always living so close to the edge is fucking scary and I don’t want to do that anymore.

Also, I’ve realized the freedom of money is in the having and keeping of it. The vibration of “saving,” hasn’t been a big motivating factor for money for me. The vibration of investing in myself and my business obviously has. So I’ve found a way around it by now choosing the word “keeping.” Evidently my Soul likes to keep money, but feels cheated if she has to “save” it.

Yes, it’s only a word. But words carry vibration and energy with them and if we’ve got triggery issues with them, the manifestation results with Law of Attraction and money will be effected by that vibration whether we want it to or not.

How do I know what my Soul wants?