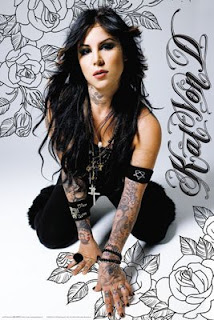 One wouldn’t immediately think of a tatoo artist as the ideal role model for girl empowerment. But, then there is Kat Von D (Katherine Von Drachenberg), who makes viewers question the definition of beauty and is an empowering illustration (literally) of what it’s like for women breaking into male-dominated industries.

Perhaps you’ve occasionally tuned in to Miami Ink. Kat used to be the only girl in the tattoo shop and it was entertaining to watch her try to mesh with the men who dominate her profession. That’s when my 5-year-old daughter, Ainsley and I became fans. Then she got fired. Well, you know she got mouthy with the boss and turned her nose up at jobs she didn’t really want to do.

The Learning Channel, brilliantly offered her a show, LA Ink, which premiered on Tuesday night. Genius!

I wouldn’t have described beauty as ink portraits and doodles covering a massive portion of a woman’s body, yet there is something infinately beautiful about Kat and the other tatted up chicks on LA Ink. There is something authenticly lovely and feminine about her that makes you question traditional beauty. Perhaps it’s her retro-feminine sexuality and the pin-up marketing that make her so appealing. Maybe it’s her more sexy than not rocker chick style. Could be the dramatic eye makeup and the black long hair.

Not everyone could pull off tattooed animalistic spots on her face. Somehow Kat makes it hypnotically beautiful with intention.

What we’re used to seeing as beauty is featured on “reality” shows like E!’s Sunset Tan or The Girls Next Door, where everyone is tan, bleached blond and wearing the latest designers. Heck, even The Simple Life, which features Nichole Richie, a racially mixed woman, only allows tan blond beauty.

LA Ink and Kat Von D make us question and redefine our definition of beauty. It’s really quite refreshing to broaden the scope of acceptable beauty. Broadening the definition of beauty, will hopefully, prevent our daughters from appearing on Dr. 90210 in an attempt to surgically become narrowly defined beauty.

It’s empowering to watch Kat recruit her employees – mostly other female artists – and know that this is the first time they’ve ever been able to work in a predominately female environment. I think it’s going to be fascinating to watch how that plays out. She brought in one male tattooist, her mentor, to provide the grounding for the catty and PMSy factor, Kat said.

I expect LA INK, based on the first episode, to deconstruct femininity, beauty, body image, gender and self in a way that will make both myself and my daughter feel empowered.

On Tuesday’s show we saw a client getting a tattoo of a 1950s era Gil Elvgren pin-up dressed in a sexy apron with the tag line “I should be in the kitchen.” We can look back on the fact that we were bound to domestic roles with a sense of humor, so its completely ridiculous and ironic, Hannah Aitchison, one of LA Ink’s female artists said as she did the tat.

It may seem like I’m setting back decades upon decades of women’s rights. I’ve pushed myself into a very masculine world and I’ve succeeded. But at the end of the day I want to go home and put a little cute apron on and make cupcakes and that’s all I want to do. I love the feminine part of my life, so this is just a reminder of that, Jessica, the client, said.

Hit record on the DVR Tuesday nights on the TLC Channel. Live & Learn!