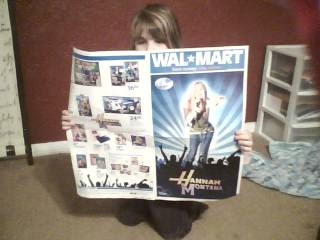 Have you gotten the four-page Hannah Montana Branding advertisement from Walmart?

Maddy gets ALL the Hannah Montana stuff! She has the wigs and the microphone and sleeping bag and DVD and CD. How come she gets it and I don’t?

Hannah Montana is a Disney Channel sitcom and she’s played by Miley Sirus, Billy Ray Sirus’s daughter. She’s a secret rock star by night and a normal girl who goes to public school by day.

Last year Hannah was on our Not Allowed to Watch list because of her tone and the dating themes. But, I think we’ve established that Ainsley is getting her tone straight from the source – me – rather than Hannah.

I argued allow Hannah because she keeps Ainsley (and Zack) occupied while I write.

I’ve been contemplating doing a post about how the whole plot is propaganda to trick little girls into believing they really can have the best of both worlds (insert theme song music here) with the whole motherhood/career thing, without having to sacrifice anything.

But, since the Best of Both Worlds Tour commenced, the commando marketing is starting to get to me. Have you ever seen an entire four page ad dedicated to one celebrity brand? I can’t say that I have.

Of course, Ainsley wants everything in it.

With the concert selling out at reported $1,000 tickets Hannah mania is feeling more and more like a deranged attempt to seep funds out of parents’ pockets.

The lesson here is to teach girls how to resist commando marketing.

No. You don’t need all that Hannah Montana stuff.

It sounds so simple doesn’t it? No. You don’t need it.

I just haven’t gotten a lot more creative than that.

Well, aside from my ordinary lessons on being a wise consumer: