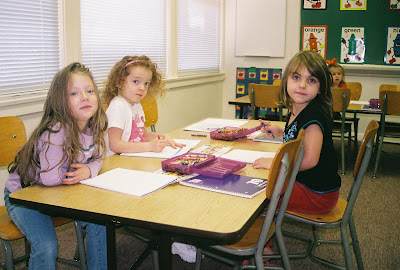 Am I the only mother who actually cried when I realized my daughter would have to experience the trauma of junior high school?

I now realize that was silly of me – girl drama starts much earlier now.

In preschool I got my first taste of it when her BFF Maddy didn’t want to play with Caitlin with a C and Kaytlin with a K on the playground. I never could understand why, but I think it came down to Maddy wanting to play with only Ainsley all the time.

Finally, one day Ainsley told Maddy, I’ve played with you all the time for the whole year. I’ve had enough. I’m playing with them now.

Which, of course, devastated poor Maddy.

In Kindergarten there are more girls involved.

The reports I get from her teacher are glowing, Ainsley’s popular and has a close group of friends. She gets along well with the other children. She’s is not bullied and does not bully others. She’s a perfect student. Very helpful.

Which is inconsistent with what Ainsley tells me about her day.

It seems every single day she fights with Taylor or Aaron about who is going to play “The Mom” or swing on the swings. And everyday it ends with these words,

Fine. I’m not your friend anymore. I’m never playing with you again.

Every time she seems to resolve her issues with her classmates Taylor and Aaron, BFF Maddy’s class comes out for recess. They get upset when Ainsley abandons them to play with her BFF. Maddy apparently has no interest, once again, in being friends with Taylor and Aaron and Taylor and Aaron don’t really like Maddy, says Ainsley.

Pre-Kindergarten it was my easily-held belief that ALL bullying and mean girl behavior should be punished harshly in the early years to prevent such nastiness from culminating in junior high.

Obviously, there is some mean girl behavior going on on the playground. But, the stories are so involved that I’m not sure exactly who should be punished or even if punishment would accomplish anything.

I’m thrilled that Ainsley is coming to me for advice, but frankly I haven’t much.

I never really did learn to win with girls in school.

How Do You Spell Zac Efron?Bad Word
Scroll to top