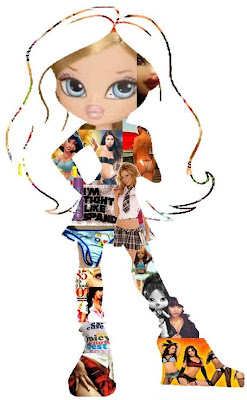 Have you been over to the Campaign for a Commercial Free Childhood? It’s a non-profit activist organization on the side of NOT selling our kids out.

Which, until recently I thought was a given, but apparently that was naive. Now, I pretty much think that unless people get LOUD in the face of advertisers they’ll sell every girl or boy child as long as they can pay their amortized mortgage and their fancy limited-edition, financed Tahoe.

I would love to attend the upcoming conference in Boston, Consuming Kids, The Sexualization of Children and other Commercial Calamities.

I’ll invite any attendee of the conference to guest-post what they learned on So Sioux Me.

I love a site that lets me take real action in less than 5 minutes. While I was over there I got to write a letter to Scholastic to tell them to stop marketing The Bratz in my daughter’s school.

You can also send a letter to McDonalds demanding they stop selling sex with a side of fries with their sexualized My Scene Barbies as a Happy Meal prize.

I understand that, as a parent, one of my jobs is to teach my children to decipher advertising and teach them to resist it.

Really, I don’t think it would be reasonable to stop marketing to kids completely. But, do they have to be so deranged and disgusting about it? Could they perhaps apply an ethical boundary here and there? At a marketing meeting deciding to market toys that look more like hookers than business women is it insane to think the marketing professionals, presumably also parents, might ask “What kind of long-term effect might this have on kids?”

Is that really too much to ask?