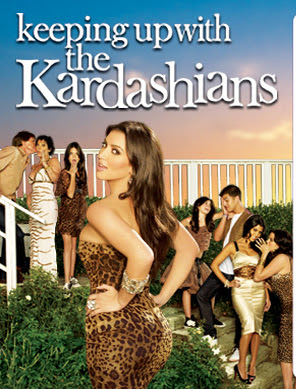 Keeping Up With the Kardashians is another E! television series which makes me want to . . . what? It’s so depraved, I’m at a loss.

This guy is pretty much the superhero for pedophiles, but whatever. Kris feels it would be a good career move to sell her model/actress teenage daughters to him. She doesn’t understand why anyone would let a little “stigma” of sexual exploitation of children bother them when this is obviously a “classy” swim wear collection.

So she takes the girls, lying to her husband, and poses for Girls Gone Wild. Brilliant motherhood/management move.

Father finds out and goes off to find Kris. He leaves their pre-pubescent daughters with adult brother Brody. This is where the show takes a Nambla tone – and I’m sure all members of Nambla recorded the episode and will watch it over and over with their pants down.

A video camera is gotten out and the babysitting adult male friend tapes the girls dancing around the stripper pole singing Girls Gone Wild and flashing their bare stomachs joking about putting it on You Tube. Finally, brother Brody walks in the room and puts a stop to it. But instead of punching his friend in the face, he thinks it’s all really funny.

At the end of the episode the 3 older girls joke about being Charlies Angels with the imprisoned pornographer who jokes about wanting to screw them and which of them is hottest.

Their father “accidentally” finds the video of his youngest daughters flashing and screaming Girls Gone Wild around a stripper pole and it’s obvious who’s in trouble – the pre-teen girls. How dare they act like that?

We see Mother, feigning shock that this kind of porno-fun is going on.

What, Mrs. Kardashian? Did you think maybe they should wait until they are 12 or 13 before selling them to the highest-bidding child pornographer? (Which, in this case, happens to be E!)

Previews for next week involve Hugh Hefner and Mrs. Kardashian trying to convince her daughter to take her bra off. E!’s website is featuring Kardashian parental advice about how to raise responsible children and get girls to dress age-appropriately.

This is the new normal.