Halloween has become S-E-X-Y. But, then so has innocence. If you deconstruct these costumes what about them becomes inappropriate? The pose? The make-up? The quantity of clothing?

I think it’s the porn-star quality. Let’s face it this photograph from a Newsweek article, titled Eye Candy, about how sexy girls’ costumes have become.

Is this commentary on our daughters or how sexualized girls have become? Maybe.

The scary part is – parents and girls are participating.

And it’s almost impossible not to participate in some way. The fact is that virtually all girlness has become pornified. When deciding what the boundaries are for my own daughter I find them to be vague.

Do I outlaw the Dancing with the Stars oversized-sequined dress? What about the pumpkin leotard? Too much leg? A little too much make-up and she’s JonBenet Ramsey. A tear in the dress and she’s a street walker. Some midriff makes us think of a stripper. The heals? Is that what tips a dress over the edge into rap video territory?

Which then leads to the truth – it’s not in my power to reverse the pornification of girlness. And really, it’s not my daughter’s job to make pervs and pedophiles and judgmental mothers look at her in an a-sexual way. That responsibility lies with them.

To criminalize what Lolita wears for Halloween – isn’t that just more blaming the girl for thoughts and impulses originating with Humbert Humbert? Which, in fact, is entirely out of our control? And isn’t this whole problem Vladimir Nabokov’s fault for introducing child pornography into mainstream literature with the release of Lolita in 1955?

Of course, to be a good mother I carefully walk the line with a strict monitoring of the outfit, hair and make-up. It’s vicious out there – but, mostly I’m not so afraid of what perverts will think – cause really they have the Internet and a club now (Nambla) and their thinking is already permanently f*ed up. I’m most worried about the judgement of other mothers whispering, I can’t believe she let her daughter leave the house in that!

And yes, at last night’s Halloween Trunk or Treat I did hear a Who lets their daughter come dressed as a hooker? and I also heard a Look there’s JonBenet.

Unfortunately, I heard those things come right out the mouths of my husband and myself.

I didn’t hear a single criticism of what a boy had chosen to wear for Halloween. They could have shown up in their underwear and no one would have been the least bit offended. This is a real double standard folks.

My friend Violet thinks perhaps after all those years of sexual repression Halloween has emerged to allow women to let out their inner-Harlot. I whole-heartedly agree with about adult women. I’ve certainly had to de-slutify my own costumes since mothering a daughter.

But, little girls – it’s such a tight rope of acceptability they walk.

Oh, what did we wear? We had settled on a satirical costume as matching Dairy Queens, 1st Runner Up and Second Place. But, halfway out the door Ainsley stripped off her homemade beauty queen sash and declared herself a Princess.

Of course I let her – it is Halloween. Isn’t the fun of it just being that which is forbidden? 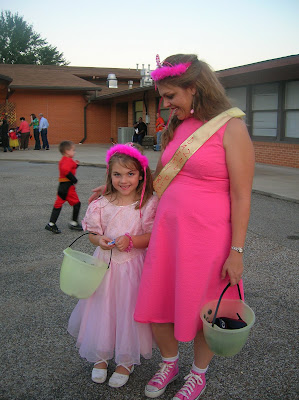 Self Portrait of a HousewifeKardashians & Girls Gone Wild
Scroll to top