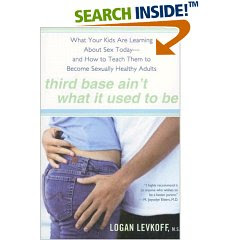 I just read Third Base Ain’t What It Used to Be: What Your Kids Are Learning About Sex Today- and How to Teach Them to Become Sexually Healthy Adults

This book covered every single aspect of sexuality that might come up with your kids.

I was shocked virtually the whole time I was reading it. Not so much by the content, as by witnessing my own emotional responses to the content in connection with my daughter. Truthfully, reading it was not a pleasant one for me. It brought up issues.

That said I thought it was a very wise. Levkoff points out that if we, as parents, aren’t talking about sex with our kids we’ll be the only influence in their lives not putting in our two cents.

Which is extremely dangerous for our kids as all the other influences are promoting a very unhealthy sexuality.

Sex is everywhere. But, not really the good kind. It doesn’t take a genius to realize that our kids are exposed to blatant, inappropriate sexuality with negative messages and connotations multiple times a day – and that’s just during the commercials.

If there is any hope for daughters at all parents should be talking as openly and honestly as possible.

This, I believe with all my heart, in a cerebral kind of way.

In reality when my daughter asks me a question concerning sex I feel as though my conservative parents have temporarily inhabited my body to the point that I hear my own mother’s voice come out of my mouth, “where did you hear that?” with a hysterical accusatory urgency.

Okay, I don’t actually say that, but it is my first irrational instinct.

The truth is that I don’t feel my own sexuality is a healthy one. It’s more of a reaction to the oppressive anti-sexuality of conservative religion mingled with rebellion, an intellectual political response, a teaspoon of good old fashioned Christian guilt, a lifetime of hormonal biology, more than a few mistakes and regrets, influenced by hyper-sexual contemporary culture that becomes increasingly offensive to me, with some violent and abusive sexual trauma thrown in, mingled with a good dose of busy maternal exhaustion. The combination of which doesn’t leave me feeling very equipped to pass on a healthy sexuality to my children.

That said, reading Third Base Ain’t What It Used to Be: What Your Kids Are Learning About Sex Today- and How to Teach Them to Become Sexually Healthy Adults

did better prepare me for some contemporary questions I’m bound to face as the parent of contemporary kids. I hadn’t really confronted the modern-day reality that kids are exposed to an advanced sexuality with little nuance and they are going to be bold enough to ask me some provocative questions.

Except that I don’t ever want to talk about it again. In fact, I don’t want them to ever know some of the sexual stuff they’ll be exposed to even exists. See that? It’s gonna take a healthy dose of courage to have conversations with my kids about sex and sexuality, after reading the book I feel better armed with adequate information.