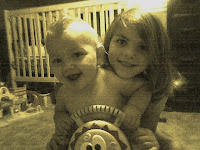 The kids got new haircuts. Ainsley got a long bob and Zack, a mohawk. Both haircuts beg the issue of the meaning of hair. How much do we use our hair to create our identity and to identify with our children?

The first time Ainsley ever got more than a trim is a very sore spot in our family. It was unhealthy, had a bunch of split ends and was without shape or form. She was three-years-old and for some reason it seemed rebellious to cut her baby hair. I had known lots of mommies with a no-cutting-of-the-baby-hair rule, not even allowing toddler daughters to cut bangs to allow basic vision. I wondered, Who is she, Samson? Does her hair have special powers I don’t know about? If we cut her hair, will she lose her special girlness?

I then made a huge blunder. I dropped my 3-year-old daughter off at my mother-in-law’s with permission to give her a “long bob, long enough for a ponytail.” She came back with a short Dorothy Hamill pixie cut. When my husband saw it, he got so upset he nearly cried and then left furious about what I had done.

A. This was not the haircut I had asked for. Why was he angry at me rather than his mother?

B. Why was he putting so much meaning into a bad haircut? Did he know how many bad haircuts she’s likely to have throughout her life? Why was he making it into such a big thing?

C. Why was he making her girlness all about the length of her hair?

Ainsley loved having short hair and has asked, since then, to have her hair cut short. A short bob is what she asked for this year. She was forbidden, I was forbidden, his mother was forbidden. Internet sites with long bobs were perused by all three of us (me, husband and his mother) to decide exactly what style and length Ainsley’s hair would be. Ainsley was asked, after everyone else had agreed, whether she could live with that haircut.

At the same time my husband likes my pink highlights, is totally fine with me putting pink streaks in Ainsley’s hair and thinks Zack’s mohawk is baby-cool.

It’s an enigma. One that seems to have everything to do with girls having long hair.

The Meaning of Hair