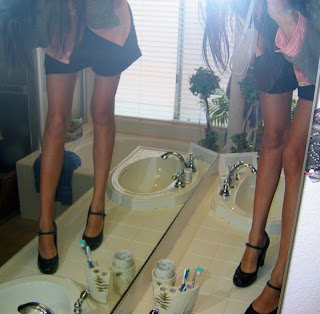 I’m reading this little book called Bergdorf Blonds by Plum Sykes where I’m seeing the word ana. As in you’re looking totally ana, you must be deliriously happy. Ana is short for anorexia and is considered the best thing to be.

It’s not just appearing in trashy hip-chick lit, it’s appearing on social networking sites where the lines are being blurred between recovering from eating disorders and glamorizing being so thin they’re near death.

Worlds Largest Pro Anorexia site is where girls go to support each other in keeping their anorexia or bulimia.

after a two day fast, i f*ed up. and had six slices of bread and butter :'( plus a bowl of spaghetti. i tried to purge but i couldn’t. then i spent ages crying. how sad can i get.

i love stepping on the scale and seeing the numbers go lower. i really do. it feels like a high– but sometimes i actually get scared for my own health and well being. my BMI is 15. im scared sometimes that i wont wake up. i tell myself i will eat healthy and maintain my weight but then in contrast i get scared to eat TOO much. so i cycle on eating too much, maintaining weight, losing weight, freaking out, eating too much… over and over again.

Xanga, Facebook and Myspace all have pro-ana and pro-mia sites. Those who participate in these sites defend their “right to their lifestyle choice.”

They exchange purging tips, ways to avoid eating when they are in social situations, how to hide weight loss from doctors and parents, and what pills and laxatives work best. These strategies are quaintly known as thinspiration.

According to a 2006 survey of eating disorder patients at Stanford Medical School 35.5% had visited pro-ana/pro-mia web sites; of those, 96% learned new weight loss or purging methods from such sites.

They post ultra-thin photos of themselves and long to be, not their own thin selves, but someone thinner and better.

This pro-ana and pro-mia and thinspiration trend is a cry for help from the girls who internalized all our self-loathing jokes and indulged in all the girl-hating media.

Oh mothers. What would we do to protect our daughters from this outcome?

Would we stop complaining about our own bodies and appearance?

It’s a tangible and effective place to start. It’s not meaningless and without consequence to joke about our own fatness, ugliness, lack of beauty perfection. It doesn’t only lower our self-esteem, it lowers theirs too.

Would we take the time to write advertisers?

Is it worth monitoring their Internet use and television exposure?

The mother who radiates self-love and self-acceptance vaccinates her daughter against low self-esteem, Naomi Wolf

Seven Random and Weird ThingsSmoke Out
Scroll to top