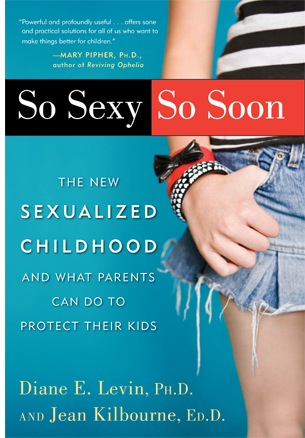 How many times do you find yourself trying to protect your children from harmful and destructive images while watching family television?

“What the heck is going on?” I thought. “Why are my children and I being subjected to this kind of sexually violent imagery in a commercial?”

So, I wrote the FCC. The Federal Communications Commission used to be the people who governed our airwaves. They used to control when and what was allowed to air during times when children were expected to be viewing television. Remember when they wouldn’t let radio stations play George Michael’s, I Want Your Sex?

Many months later they wrote back.

“Each network or television station has control over what it airs during commercials. You’ll have to write each network to complain about every commercial you feel is inappropriate,” they informed me.

“What? Who made that stupid rule?” I wanted to know.

And now that I’ve read So Sexy So Soon: The New Sexualized Childhood and What Parents Can Do to Protect Their Kids

, by Diane Levin Ph.D and Jean Kilbourne, Ed.D, I know who made that stupid rule.

As a point of fact and matter of record it was specifically: Ronald Reagan who got the “deregulation of the media” rolling. George H.W. Bush furthered the problem with the telecommunications act of 1996.

The euphemism for more sex and violence on TV is “deregulation of the media.”

Essentially, deregulation means fewer laws. Fewer laws governing what? What companies can sell and who they can sell it to, when they can run an ad, and what the ads’ message can contain.

To that end, deregulation has been a fantastic success.

Companies spend about $17 Billion annually marketing to children, a
staggering increase from the $100 Million spent in 1983, according to Campaign for a Commercial-Free Childhood.

Unfortunately, their freedom to make more money by advertising whatever they like in front of whichever audience they buy airtime for – is infringing on my freedom and my children’s freedom to not be subjected to sexualized violence and objectification of people on television.

This is especially upsetting to me in regards to commercials where I, and children who don’t know better, are a CAPTIVE AUDIENCE and there is no implied consent, as there is when choosing to watch a sexual or violent movie or TV show.

Did Ronald Reagan mean for deregulation of the telecommunication industry, including children’s television, to result in hyper-sexualized and all-too violent advertising for children? Was this his intention?

Was it the intent of the George H.W. Bush and Congress in Telecommunications Act of 1996 to further open the floodgates for marketers to legally target children, instead of targeting their ads at parents?

This is the result. This is where we’re at.

I know for a fact the religious conservatives who voted for them would not have been in favor of such legislation if they had understood the kinds of sexual and violent imagery which would be coming at children from every direction. But, again, who cares?

It is from here we have to make a choice. Do we want to allow this kind of thing and all its consequences on our culture, our children and our own minds to continue?

I was just reading in A Return to Love: Reflections on the Principles of “A Course in Miracles”

by Marianne Williamson, this morning, the definition of one of the most beautiful miracles – Changing Our Mind.

The fundamental change will occur with the change of mind in the thinker.

We can change our minds.

Right now. There are numerous bills before Congress that would re-regulate our children’s media and make parents, as opposed to marketers the primary influence over our children’s minds. Visit Campaign for a Commercial-Free Childhood for direct links to find out about the bills and send letters directly to representatives.

Stay tuned we’ll get into the ideas presented in So Sexy So Soonand the practical steps to change our own minds, our schools, our culture and our media’s influence over the role of sex in our children’s lives.