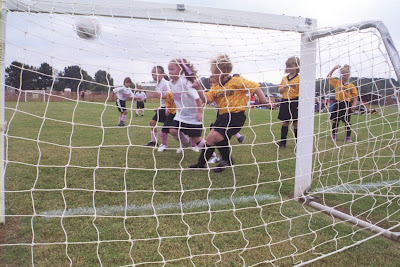 Good Job! You can do it! Get that ball! You’re not afraid of her.

Did you try hard and have fun? That’s what’s important! I’m so proud of you.

Get in there and get the ball!

There is plenty of evidence that five-year-old boys and girls have equal athletic abilities. Yet, the differences between these two soccer teams are startling.

Encouraged to practice an hour per day for boys (by both parents and coach), no extra practice encouraged for girls.

Focus on trying hard and having fun for girls, focus on winning for boys.

What do you think the consequences of these differences are?