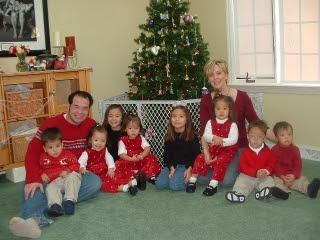 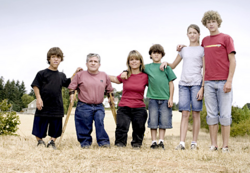 Little People, Big World is about Amy and Matt Roloff. They are little people or dwarfs. They have three average height children and one dwarf child.

Jon & Kate Gosselin were a normal couple with some fertility issues. They scored some twins with their first pregnancy and Kate convinced Jon they should have “one more.” They got six. Oh and this poor mother is a compulsive cleaner with 6 toddlers.

Most reality television doesn’t have any relationship at all to reality. These two families are REAL. They deal how I deal – with a tone. It’s the arguing and bickering and real-life family interactions that keep me rolling in my seat the whole time.

When Kate gets all bossy with Jon in the toy store and then he tells her Stop talking to me like I’m a dog I laugh my head off. They took 8 small children to a toy store and that’s the worst thing that happened. Ha! I see people with one whinny brat come out of the toy store worse off than that. Or they try to get sextuplets dressed to go somewhere and and finally Jon snaps Yes! I only told you 17 freaking times! and I’m just so proud of them for actually leaving the house.

When the Roloffs take their family on a road trip in a motor home, to see where Matt proposed to Amy, and they fight the whole time. Finally Amy goes on a rant:

Look at me! I do not want to leave trash in the fire pit! This will be enough to piss me off do you know that? I don’t know why I even came. My God, you people argue about everything!

As someone who is trying to get a grip on her tone to improve her own slightly less than perfect family life these two shows are like pure love and joy to watch.

We may not talk to each other so nicely sometimes, but we’re still here pulling for the same cause and that’s evidence that we love each other, explains Kate. Here, Here Kate.

Kate and Amy are my modern-day mother heroes. I nominate them both for Mother of the Year.