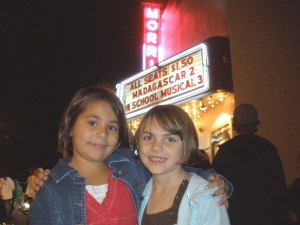 I took Ainsley and her BFF to see High School Musical 3.

I have a mad hot crush on Zac Efron. I don’t care. No one has moved me with his theatrical gyrations and love songs since I was about Ainsley’s age watching John Travolta in Grease for the first time.

I thought I was too mature for fantasy lovers, and felt great relief from the idea that romantic love of the Disney Romance brand held no attraction for me anymore. And it was liberating.

But, I left High School Musical 3 in a state of what can only be described as LOVE DRUNK.

It’s like the milk drunk babies get from breast feeding,the intoxicating high some women get from reading romance trash like Twilight, and the drunk you get from planning your fantasy wedding and results in Bridezilla, the lightheadedness girls get from the very first kiss ever or from fantasizing about romantic declarations of love and devotions expressed by your future one and only.

Love Drunk. Girls are prone to it.

Love Drunk would be the most wildly fun and pleasant experience in life – if men and boys weren’t so chronically disappointing, often declaring such things “stupid” and adamantly refusing to play their role as gyrating, dancing, wooing, admiring, verbal and romantic leading man. Thus, leaving women and girls everywhere chronically disappointed in their real-life relationships. It’s our modern-day Love Conundrum.

Nonetheless, I greatly enjoyed this unrealistic, gravely naive, and absolutely fun and wonderful film. It will earn you mega relationship capital with your girls.

On a practical note the things I loved about what this film had to say about gender and gender roles include:

* Gabriella, female romantic lead, is selected for prestigious academic honor at Stanford. Other colleges mentioned were Yale, Berkley, University of Albuquerque and Juliard. These kids aimed high – I like that for a standard.

* Gabriella did not ignore her potential or reduce herself to stay with Troy at University of Albuquerque, nor did she dumb down to make him feel like more of a man. Gabriella, took her opportunity.

* Troy, always pressured to be the jock and play football at a specific college decided on by his father, rebelled by taking theatre.

* There were actors in the movie from every ethnicity and every body type.

* The main moral of the story is that everyone has special gifts and talents and children of both genders should pursue excellence ambitiously.

* Sharpay wasn’t nearly as big a B-I-T-C-H this time. Oh, she still tried to steal the show, and thought of no one but herself, but she was much nicer about it.

It’s hilarious that both Madagascar and High School Musical challenged male gender roles by making both male romantic leads performers. Hear that John Travolta, Tom Cruise and Brad Pitt – you’ve paved the way for boys everywhere to be able to be jocks AND thespians.

At the beginning there is a locker-room-boys-in-towel-hazing scene that was so lighthearted I couldn’t get upset about it. There is potential for you to be upset about it, I tried. Couldn’t muster it.

There is also a dance scene where Gabriella’s little baby doll dress is frighteningly short. Know this – it never shows her panties – it only looks like it might.

I was sitting between 2 teenage girls and the two 1st/2nd grade girls I brought and their excitement was highly contagious.

The girl on my right – I did not know her from Adam – was experiencing that hormonal flood of emotion we call “puberty” in our culture and she was moved to tears and hysterical-love-drunk giggle fits for the entire movie.

Watching her emotional expressions moved me to laughter and giggles myself. I couldn’t help it.

I can’t tell you how much relationship capital I earned by taking her and a friend to see this fun little movie. Support this website, buy the video here:

Coincidentally, I read about a new brand of Disney Movie in O Magazine this month. Abigail Disney, a niece of the late great Disney feels as ambivalent as I do about Disney Princess Movies and thus avoided the studio her whole life.

That is until she felt compelled to tell the story of Liberia’s Women who ended their civil war by threatening to take their clothes off. Read more about that in The Rabble Rousers.

While that was an intriguing variation on The Disney Movie, my next thought was this: How do we get Abigail Disney to give up her boycott of the family business and transform Disney’s male-dominated, male-written and male-produced Princess Films into something we can be thrilled to saturate our daughters’ brains with?

Could there be a next generation of Girl-Positive Disney Movies?

How Do You Spell Zac Efron?

You’ll Shoot Your Eye Out!