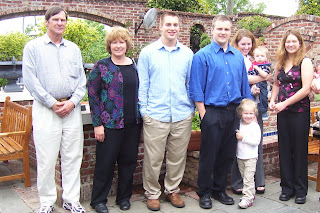 I recently met a woman who faced a fascinating dilemma. Would you consider mothering long-distance for a year?

Debbie Mahoney was a registered nurse who had gone as high as she could, having achieved a doctorate degree and completing post-doctoral work in nursing. She knew she was capable of more and wanted to pursue a career as a nurse practitioner.

In 1996 she applied for and won a fellowship from the W.K. Kellogg Foundation, an organization “helping people to help themselves, to pursue her NP license. The new status would double her salary, as well as open new professional doors for her.

I knew I wanted to be a nurse practitioner, Debbie said. [The Kellogg Foundation] paid my salary and my schooling was free. I was totally relieved of work while going to school and it was something I had always wanted to do.

The catch? She had to move from East Texas to North Carolina for one year. Which would have been no big deal for a single professional, but she had three children and a husband.

Yes, it did occur to me to stay, Debbie admits. Part of it too was the honor to be awarded this type of fellowship. It was a big deal at work. We were caught up with the great honor.

She went on. Really, my children were supportive of me going and I asked each of them and they said, ‘Go for it Mom. Were proud of you.’ It was a once in a lifetime deal. If I passed it up, it wasnt going to come again.

Her husband Tom, a nurse anesthetist, had a job he couldn’t very well abandon for one year.

My husband was very supportive because he knew this would advance my career, Sarah said. To be honest, Im sure the fact that my salary was going to double and we had three kids to put through college was what made him think it would be such a good thing. We had been married for 22 years by that time, so I guess you could say our marriage had a baseline.

Sarah and her family had 10 months to get ready for her year away from home. They went to family counseling and talked about how her leaving the family was going to affect each member.

Our counselor was very supportive, remembers Debbie. He said, If you dont do it, you may always have regrets. He felt like our kids would benefit from my going in the long run.

Not everyone was so supportive. Debbie remembers being confronted by a woman in her church, How could you do this? How could you be such a terrible mother to go off and leave your family? she said. That made me sad, I know there are traditional values. But, in my own spiritual life, I really felt like this was something God wanted me to do and that the Lord had gone before me and arranged everything.

Joseph, now a 26-year-old married father of two with a masters degree in medical physics, was 16 when his mother left.

I dont want to give the impression I was traumatized by it; by no means do I feel sorry for myself. But, I guess at the time I thought, well shes doing what she wants to do and it doesnt involve me or my dad or my sister. I was never angry about it, but it for a short time it was hard.

I guess the question is, do you live to work or work to live? Joseph said. We were getting by pretty well. I looked at it like, shes already got a decent job and our family wasnt lacking. So it wasnt something for her family. It was for her. I realize now our country and the world is not fair to live in and a lot of women have to make that choice. I dont really think it would have been any different if it was my father that went to North Carolina. The role of a successful female never crossed my mind. It felt like putting work before family. I didnt look at it as symbolic empowerment for women.

But, there is no long-term damage to our relationship, Joseph said.

Debbie made it clear that had it been Josephs Senior year in high school she would not have taken the fellowship. She also pointed out that Joseph had privileges, such as private college tuition, they wouldnt have been able to provide without the extra salary.

Sarah, 13 at the time, had just made the cheerleading team at her junior high school and decided to stay home with her dad too.

I was worried about my daughter a lot, Debbie said. The counselor had told me to hide little notes for her that shed find along the way. I dont think that really meant anything to her. I dont think it was meaningful at all. She had a lot of strife going on with cheerleading that year, but even had I been at home, she wouldnt have shared that with me. My daughter is not a person who opens up, she keeps things inside of her. So, I was most worried about her.

Now 23-years-old, a daycare worker in Columbia, Missouri, Sarah said, I was happy for my mom, but I was sad to see her go. I was really proud of her. It wasnt really that hard, I was involved with school activities and we just went about our day to day routine, it was pretty cool. We got to see her every six weeks or two months so I didnt feel like I was missing her too much.

It really showed me that women can excel in the work force if you have those kinds of opportunities, Sarah continued. We grew up in a small town where typically the dad goes to work and makes the money and all the decisions. But, it was great to see my mom make her own decisions and pursue her own career.

Steven, a 3rd Grader, moved with his mom. Mother and son agree the year was fantastic for him.

I felt like he was always overshadowed by the other siblings so this was a great opportunity for him, Debbie said. I really think my three children are closer because of it. I think they missed their little brother and before most of the conversation at dinner was all about the two of them. My older son was a little bit of a bully to his little brother and when we went away and came back I think there was a whole new appreciation between the siblings.

I was always closer to my mom, so I didnt really miss my dad too much. But I probably would have been upset had my mom left me, Stephen said.

Each of Debbies children said they would consider making a similar decision in their own future families if the opportunity presented itself.

Joseph said about his wife Deidre, also a nurse, If she really wanted to do it, I wouldnt want to hold her back. But, my wife has a very different personality than my mother.

As a woman herself now, Sarah said, Oh yes, I would do it. It was awesome. I would love to do something like that.

For herself, Debbie feels professionally fulfilled and she doesnt regret leaving her family that year.

I teach in the graduate program at the University of Texas at Tyler and practice as nurse practitioner. I am able to go on mission trips with Refuge International where I can see patients and prescribe medication and perform small surgeries. I also sit on their board of directors, Debbie said.

Being a nurse practitioner has helped me offer more to the world, and my children, than I could have if I hadnt done it, said Debbie.

I think it was definitely empowering to see my mom go for that year and we need more women like my mom out there, said her daughter.