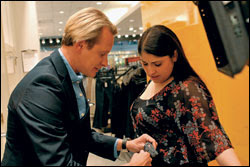 Did you catch the premier episode of Lifetime’s How to Look Good Naked?

I think there is enough evidence that body image is, at least partly, emotionally-inherited.

Nothing is going to change the fact, however, that mothers being critical about our bodies puts daughters in a more vulnerable position self-image-wise.

How is a daughter to stand up to the onslaught of negative messages about a normal woman’s body in this highly sexualized and beauty-conscious culture, if Mom can’t learn to love her own body and cut herself some slack?

Women need to get proactive about their own self esteem. It takes work to develop and maintain a self esteem. We need to be honest that self-loathing internal chatter is getting us no where.

Enter metro-homosexual Carson Kressly to help us solve our self-esteem issues. Whatever it takes, right?

I was very pleased with the first episode of How to Look Good Naked. While this appears to be a make-over show it is about making over a woman’s insides – her self image. Let’s face it, women, as a collective-conscious seem to need an internal self image makeover. A lot of us feel like crap about ourselves and that has a negative impact on our daughter’s self image and self esteem.

One particular exercise was brilliant. Three women were shown on a monitor walking down the street. One was dressed in a slouchy over-sized sweater, one was in a boring office outfit and another was in a confident, sexy dress. The woman with poor body image was asked to identify the one that weighed most. She chose the one wearing over-sized clothing. What was revealed was that they were all the same woman. It was only her clothing – screaming about her confidence level – that made others think she was the most overweight.

While this is only a television program, it does seem logical to me that we might expect a cultural cure to a cultural problem. In other words, if we can feel better about ourselves while watching such a program – then we should watch it and implement some of the feel-good psychology suggested.

When we feel good about who we are and what we look like – well that translates into a health self image for our daughters. Which, to my mind, is totally worth the effort.