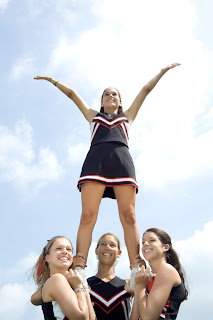 I’ve been super-conflicted about letting my 5-year-old daughter participate in cheerleading.

Isn’t it better to be the one cheered on, the one actually playing the sport, than to be cheering from the side-lines? I think so. I want to see my daughter actively participating in athletics, not standing on the side of the game wearing a short skirt, bopping around, cheering for the team. The boys’ team.

Have you ever seen a gang of boys jumping up and down cheering on a girl’s soccer or basketball team? Never mind that cheerleaders stand on the side of football games where girls still aren’t allowed. Also, in Texas cheerleading is highly competitive and I would argue, not the good kind. As a femimommy, I just hate the idea of cheerleading.

But, as I said in Red BMI, I need to actively seek exercise opportunities for her. The only options available were hip-hop and cheerleading. Then my friend said, Hey, let her come to my church’s vacation Bible school, the theme is sports. She can choose soccer, t-ball, basketball or cheerleading.

If I thought I could get away with it, I wouldn’t have told her she had the option of cheerleading. She’s too smart to fall for that kind of crap. Instead, I listed the options.

She gave me a sly smile, knowing I would disapprove, and said, I want to do the cheerleading.

Have you ever wondered why girls should be cheering for boys, but boys don’t cheer for girls? Do you think that’s okay?

Mama, when I went to watch Eric play basketball Emma was cheering for a girls’ basketball team.

Well, you weren’t there, but they had girls playing basketball and I think Emma was cheering for that team.

Do you think it’s fair that only boys are allowed to play football but girls stand on the side and cheer for them?

I don’t even want to play football, she pointed out.

When Emma took cheerleading, she informed me, they didn’t wear belly shirts, they wore long ones and I don’t think they did anything inappropriate.

My husband didn’t think it was a big deal. My friend thought I was being too extreme. Both pointed out that boys cheer these days too. The difference is, there are not entire scantily clad gangs of boys cheering for the girls’ teams.

In the end, neither argument swayed me in favor of cheerleading. What did sway me is that my particular girl wants to try it. She thinks it will be fun.

I decided it would be more empowering for her to be able to make her own decision about which sport to try than it would be for me to forbid cheerleading on a feminist principle.

She’s just a different kind of girl than I was. She’s more of a girly kind and I was more of a tom-boy. But, I don’t think it would be empowering to make her feel bad about being a girly-girl.

The more I thought about it, I could trace my negative feelings about cheerleading back to the time my parents told me we were moving again to a town with a small enough high school, where I could make it as a cheerleader.

Upset about the umpteenth move, there I stood dressed head-to-toe in black, pale skin, red lipstick totally Mod screaming, “Why would I want to be a cheerleader?” What I really wanted to articulate was, “Have we met? Do you know anything about me at all?”

So, to avoid a similar episode with my daughter, I’ll acknowledge that she is the kind of girl who thinks being a cheerleader is fun. And I’m going to get okay with that.

I did some research and according to the Official Cheerleader’s Handbook, cheerleading was invented at Princeton in the 1860s by men. They didn’t let girls do it until the 1920s when they added gymnastics and tumbling at the University of Minnesota. It was World War II, and no boys being available, that transitioned the sport to where 90% of cheerleaders became female.