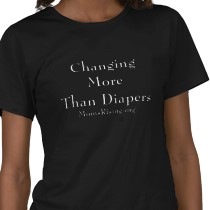 Here’s the thing about daughters. They grow up.

Since 72% of women work now it seems reasonable to assume that one of the things we should be doing as parents is to improve the work environment for women so that it’s an equitable and empowering environment for our daughters when they get there.

Mothers, you KNOW how it feels to choose to go back to your career or stay home with your baby during a woefully short sleep-deprived 6-12 weeks. That 12 weeks was one of the most anxiety-ridden of my life.

Why? I was torn between two unacceptable choices. Quit my dream and nosedive into poverty or Abandon Baby 50-60 hours a week. Some “choice!” Ha!

I don’t want my daughter to face that devastating decision. I want America to choose to respect motherhood, by joining the rest of civilization in blessing them with maternity leave instead of blowing a bunch of hot air about “family values.”

I’m done having babies. But, my daughter has yet to begin. One of the biggest changes I want to see happen is for her to have a reasonably long maternity leave that respects both her role in motherhood and her role in the workplace.

Fighting for longer paid maternity leave is one of the gifts I aim to give her future self.

They lead the way for women, housewives and career women equally, to cast aside apathy and become active participants in the making of policy.

Becoming “politically active” with Momsrising is usually as simple as shooting a pre-prepared letter to your representative letting them know how you want them to vote on a particular bill. I do not exaggerate when I tell you this takes about 2 minutes of your time.

I often hear people discount the value of a letter. Don’t – that’s a mistake. If Momsrising takes on an issue then know that you will be joining thousands of other women, other moms, in writing that letter. One letter probably goes unnoticed. But 60,000 letters causes our representatives to create examination committees, write bills, and change laws.

Another way to advocate for your daughters’ future is to buy one of their totally hip t-shirts that say clever things like, Changing More Than Diapers, Raising Children, Raising Consciousness, All Moms Are Working Moms, and adorable little onseys declaring, I need a Change, How Bout You?

Here’s what I want for Mother’s Day – Political Change. I’m going to declare my intention to seek change by wearing one of these shirts to my mommy group so the other moms, facing the same mothering issues I am, ask me “Hey, what’s Momsrising?” Then I’m going to do everything in my power to politicize some Mommies.

Won’t you join me in changing more than diapers?