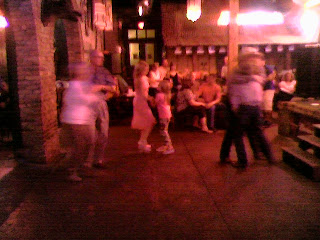 This weekend my husband and I got away without the children and we went out to a bar. Not just any bar, but bizarro bar.

Let me paint a picture, I’m wearing my hot red heals and we’re sitting in the back corner, because it was the only open table.

The table in front of us was a bachelorette party and they’ve brought a male blow up doll. We were to find out later in the evening, when they took off the doll’s Levi’s, it was an anatomically correct and very well-endowed blow up doll.

Straddling the doorway between the pool area and the live cover band area was a uniformed county Sheriff.

And all over the entire bar, amidst the smoking, drinking, anatomically correct blow up doll bachelorette partying is a 10-year-old little girl. I can only presume the woman who brought her there was her mother. The man she was with was her mother’s boyfriend, also a presumption. Several men in their party gave her special hugs that would probably have been construed as appropriate had they not been drunks in a bar, where really it looked quite inappropriate.

At one point a uniformed city cop came in. The sheriff went over to one of the ladies partying with the well hung doll and whispered in her ear. The lady then took off running with the plastic penis flapping in the wind and threw the doll on the city cop. City cop had quite a good sense of humor about it and even posed for a picture with the doll. Turns out the Sheriff wasn’t chatting with the woman about lewdness with the doll, but was enlisting her in throwing it on his fellow officer.

All this to say that perhaps the most empowering place for the 10-year-old little girl would have been at home with a really nice babysitter. I thought that was a given, but apparently someone needs to say it again.

I got a couple of pictures on the cell phone. What was I going to do, call the cops?