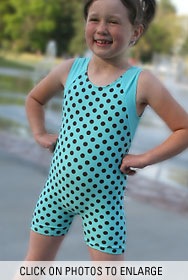 There was a story on MSNBC.com Today Show, Too young? Preteen girls get leg, bikini waxes, about how 20% of bikini wax customers at one Hollywood salon are tweens – pre-teen children.

“Nearly 20 percent of the clients that Nance Mitchell sees for bikini waxes in her Beverly Hills, Calif., salon are tweens, she says. . . 12 is the new normal.”

“But nothing prepared her for being asked by one client to book a bikini wax appointment for her 8-year-old daughter.”

But, then I thought – wait, why is it the waxing that is making me gasp in shock?

Isn’t it more alarming that 8 year olds have enough pubic hair to wax?

The sub head of the story is inaccurate: Moms are bringing daughters to spas for hair removal before puberty

The fact is that 50% of girls are getting their periods by age 10 and doctors now consider it within the “range of normal” for girls to develop outward signs of puberty, including breasts and pubic hair, by age 8. It’s not that even medically alarming for 6 or 7 year olds to begin puberty, and many do begin developing breast buds or pubic hair.

Isn’t it more emotionally alarming and worthy of a {{{{gasp}}}} that we’re seeing a dramatic shift in girls’ puberty development and no public health official is coming on the nightly news declaring,

“We’re going to find an answer to this most disturbing development in girls, who hold the future reproductive burden for our entire species. In the meantime, don’t let your daughters drink the water full of pharmaceuticals. Stop injecting milk and meat cows and other animals with hormones. Be wary that extra weight causes girls to make estrogen and develop pubic hair and boobs early. Avoid plastics. We’re going to outlaw high fructose corn syrup in foods directly marketed to children. We understand the reproductive future of our entire nation depends on it!“

Instead, we hear about the early pubic hair trend in the fashion and beauty section of MSNBC’s Today Show with a sexualization of girls slant.

Shouldn’t those mothers be ashamed of themselves? the story basically asks.

The story includes a quote by Philadelphia aesthetician Melanie Engle who says the 8 year old request for a bikini wax, “was about the mother’s obsession with her daughter being a supermodel.”

OK. I can buy that. I’ve seen mothers primp their daughters as a photographer and photographer’s assistant. There is definite maternal beauty pressure.

Yet, if there was nothing to wax, if she were hairless, then her mother wouldn’t be thinking her daughter needed to have anything removed to “look like a supermodel.” Right?

Last year I did a story about Nair directly marketing to tween and teen girls with a “new” line of hair removal cream, Nair Pretty.

“It’s profoundly disturbing,” I wrote. It’s also disturbing that Nair caught onto this early pubic hair trend and marketed to it, before I, as a parent, caught up with it.

I also went off on some radio DJ who was bashing Lordes, Madonna’s young daughter, for having a unibrow and a slight mustache. I was appalled at the DJ’s lack of class and placing all this beauty pressure on a young girl.

One brave mother, Athena of 1001 Petals, wrote in the comments section of that post, “I feel kind of bad now for telling my husband yesterday that if our daughter turned out to be as hairy as me, I’d start taking her to an esthetician for waxing as soon as it became evident — unless she said she didn’t care for it. This is because if you wax regularly at such a young age, you’re saved a lifetime of regular waxing later on down the road. I had to take myself starting at 12 yrs of age, and now at 30 it is still practically a daily maintenance routine. . .I spend hundreds a year and a lot of time bothering with it.”

Athena’s right. The more I consider this hairy subject, the more I realize that I will likely assist my daughter, in some way, with her pubic hair and if she developed a mustache or side burns, for goodness sake, I’d help her eradicate it. Like I’m going to throw her to the Mean Girls and hope she survives?

Swim suits are not designed to cover the pubic area. They haven’t been for about 40 years.

In “Clean” Bikini Line I wrote about my own struggle since my teen years with various methods of shaving, Nairing, one excruciating episode with Neet and a vicious chemical burn.

I’m amused by Campaign for Unshaved Snatch (CUSS), but I still keep my bush rather trimmed, as a courtesy to my husband. I wear swim shorts rather than show off my all my private hairs when we go swimming. The itching always gets to me mid-grow.

But, is my daughter really going to be into wearing one of these modest suits that would cover her bikini area? Am I going to make her be the only kid at the swim party or pool to do so?

I shave my pits and my legs. I pluck my eyebrows. I search for stray hairs on my chin and pluck them immediately.

It is only my budget that keeps me from getting all this hair waxed off. When I lived in NYC there was hair & waxing salon on every corner and it was a mere $30 to get my bikini and eyebrows done. I did it whenever I could afford it.

It’s the least painful than other methods, it lasts longer and it was the ONLY thing that prevented razor or chemical burn – in other words waxing was the only solution that I didn’t trade unwanted hair for an unwanted rash.

It seems to me a young daughter growing early pubic hair is an even bigger motivator for waxing.

Certainly, the minute girls develop breasts or pubic hair society treats her with less respect and she hears more negative and sexual comments about her body. The more she looks like a teenager or woman, the sooner she will be seen as an object for male entertainment, instead of the three-dimensional little girl, the young child, she really is.

What bigger incentive is there to hide pubic hair, keep it as private as possible, or have it removed?

Does the removal of hair further sexualize girls, because the latest fashion is for adult women to remove hair and get a Brazillian wax? Ironically (and a little disturbingly) making them look more like children.

Or does the removal of a symptom or sign of puberty buy a little girl some more time to be a child?