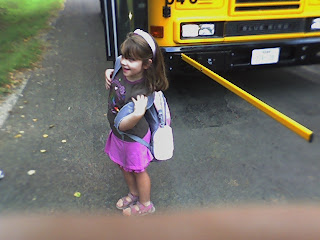 The first week of Kindergarten didn’t go as smoothly as I had planned. Perhaps that’s the problem with having a plan, you get too attached to the outcome and then become disappointed.

Practical problems included the bus taking 2 whole hours to bring my kid home. Two hours is a heck of a lot of time to spend on a bus. We live within walking distance of the school. Literally about 5 blocks. Of course I called the school twice to find out if my daughter was still there, had been brought back, etc. When she finally got off she said all the kids had fallen asleep and had to be carried out by parents. Day 2 same problem. Day 3 I send a note saying I’d be picking her up until further notice. I had talked to several parents who don’t allow their kids to ride the bus for fear of bullies. Apparently, the bullies needed their afternoon nap.

I had to go coach soccer without her because she just couldn’t handle an extra-curricular activity. Then we went ahead with a church meeting after school on Day 2 and maybe that was just too much for everyone. She also rejected school lunch and asked me to pack her one. Cheaper and healthier anyway.

Day 3 I picked her up and she was missing her preschool best-friend pretty badly. Not a single one of her friends ended up in her class. I guess they don’t even have recess or lunch as a group. So, I invited her friend over to play. One conflict after another (between us, not between she and her friend) resulted in two pretty major meltdowns. She’s grounded for a week.

She’s was not allowed to play soccer on Saturday. The worst part is that I still had to coach it. Once it was out of my mouth I had to do it.

I sent her to Day 4, Friday, with a massive guilt trip and major shaming lecture. Really sometimes I wish I hadn’t taken an anti-spanking discipline position. Sometimes I think what she needs is to be swiftly smacked in the mouth. That’s probably not what she needs, but it’s what my impulse is. My parents would have gotten out the belt and been done with it. Yes, her behavior was serious enough for a really big consequence. But, she’s 5, what exactly is a really big consequence?

Does external stress excuse really terrible behavior? Does that fact that she’s only doing what we, her parents, taught her to do give her a free pass? Both my husband and I have had really big meltdowns under stress. Does that mean we shouldn’t punish her when she only acts out what we taught her to do?