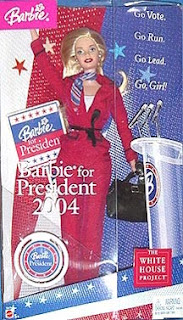 So a friend asked me the other day where I stand on Barbie. I have included “no Bratz, Barbies or Princesses” on birthday invitations. But, I also have a hot pink Barbie VW Bug and a Barbie skate board in the house.

I used to be anti-Barbie because Barbie had unrealistic body proportions. Her breasts were gigantic, waist tiny and nothing was in proportion. Perhaps Barbie-lunacy lead to so many women feeling they had inadequate breasts? Maybe Barbie is responsible for the dramatic increase in boob jobs? But, I can’t back that up scientifically.

Besides I’m not against boob jobs or plastic surgery on principle. I’m against women being perpetually dissatisfied with their bodies and passing that onto their daughters on principle. Barbie may have contributed to that feeling of dissatisfaction by making little girls feel like growing up to look like Barbie was the ideal.

“Estimates have put the doll’s life-size bust between 38 and 40 inches, her waist at 18-24 inches, and her height between five and a half and an outlandish more than seven feet, with a weight of 110. Picture Anna Nicole Smith’s breasts, suspended above Kate Moss’ waist (after a fast) all resting comfortably on Cheryl Miller’s frame (after a mid-life growth spurt). Reported a MotherJones article.

Then Barbie went and got a little-publicized maker-over. Her boobs shrunk and her waist got a little wider and her hips narrower.

“Our intention is for her to have more of a teenage physique,” says Mattel spokesperson Lisa McKendall. “In order for hip-huggers [the new doll’s debut outfit] to look right, Barbie needs to be more like a teen’s body. The fashions teens wear now don’t fit properly on our current sculpting.”

Of course, they didn’t take the average proportions of the average American teenage girl and mold Barbie to those. That would be way to healthy of Mattel.

Still I have conflicted feelings about Barbie. She’s such a consumer and I don’t like that. She gets the dream house and dream car, dream boat, dream everything. She doesn’t appear to have a job or children, but she’s guess she’s not that dependent on Ken.

Maybe I’m just jealous of Barbie. How come Barbie got everything? Why does Barbie get to have such a freaking dream life? (It’s kind of how I feel about Elisabeth Hasselbeck on The View, so easy to make judgments when you’re sitting in a dream life.)

Then, a friend sent me an ebay auction Barbie for President, where Barbie was wearing a red power suit and holding her own election sign. With Hillary running for President in 2008, I kind of wanted to buy that and give it to Ainsley. (Or keep it for myself.)

But, that’s because I love the idea of a female president of the United States. Not because I think Barbie would make a good one.

So, I don’t have a hard and fast rule about Barbie. The dream car is allowed because she was the only one selling a pink VW Bug at the time, the skate board got in because it was a garage sale find.

Ainsley used to have some Barbies and Barbie knock-offs, but I was thrilled when I found a Barbie graveyard on her bed one evening. It seemed to be a promising symbol of her emotional development. While, I can’t back that up scientifically. I do remember being inexplicably proud that she had ripped the head and all the limbs from her little Barbie-like dolls.

There is hope for you yet, grasshopper.