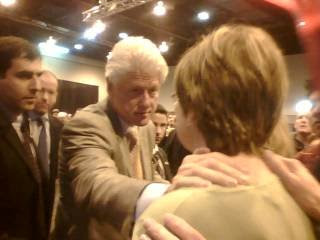 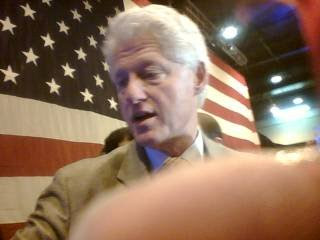 Ainsley and I got to shake Bill Clinton’s hand! Seriously. She got to meet Bill Clinton, I think he said something like thanks for coming or good to see you or something.

I was too busy recording the moment to really live it.

I don’t really know if she understands the significance of the event. I hope though that it will allow her to feel like she has tangible access to politics.

I hope that she’ll grow up feeling like she can create change in the world, like she can always do something to better her situation. I hope she’ll feel like she has access to political power I guess. By which I mean that she doesn’t feel apathetic or useless, shut out or irrelevant to the process.

We live in a democracy and that is something special and powerful. We can all have a voice and I, for one, feel this election is different than all elections before it because the Internet have really given people, women especially, a voice like they never had before. With access to a platform like the Blogosphere, it would be hard for women and other minority groups to remain disenfranchised much longer.

Take a wild guess who won.

The point is that what we say now to our daughters, regardless of whether we’re democrat or republican, is important. We can either make them feel shut out of the process for which they are entitled to participate – or – hopefully, make them feel empowered with complete access to this country’s democratic process.