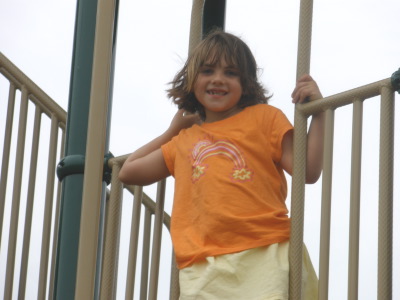 I was waiting in the Drs. office with Ainsley analyzing a copy of Girls Inc.’s The Supergirl Dilemma. A report about what kind of stereotypes girls are still dealing with in today’s world and the kinds of pressures it puts on them to measure up.

Reading the answers to the survey I figured what I really wanted to know is how my own daughter will answer these questions. (Also, it distracted her from the incessant complaining about waiting, which was driving me bonkers.)

So I read the quiz aloud to her:

* People think that girls care a lot about shopping? True or False?

* Girls are under a lot of pressure to dress the right way?

* People think girls don’t know how to take care of their own money?

* Teachers think it’s not important for girls to be good at math?

The next day, I heard Ainsley holding court with her friends:

* People think that girls care a lot about shopping? True or False?

Yeah, I guess so.

What I learned about Ainsley, and her friends, is that she’s pretty typical. In spite of all my going on about empowering girls she’s a typical American girl.

We’re making progress in major areas like math and science and money and leadership, according to the report.

The areas where it seemed we’re not making as much progress are areas where the issues become complex and nuanced.

As a married woman I would put my family (husband and children) as my “most important thing” even though my career is pretty dang important. But then her father would answer the same way.

It’s a core value, is it not? One we don’t necessarily want to outright discard.

I think a more informative question, for me, is whether it’s still the ONLY thing that’s important.

To which, hopefully my daughter would say no. While my mother and grandmother would say yes. While I say, Intellectually I know it’s not, but it’s a serious challenge for me to fight the SAHM social gravity & guilt that sucks me in, especially when I talk to my mother. But, I’m working on it.

Other questions that throw us off kilter are about the ones about being kind and caring.

Ideally, we’re teaching all our kids to be kind and caring and we’re bringing the boys UP to the level we expect from girls. Not the other way around.

If you answer false to the question it feels like you’re saying you want girls to be mean and uncaring. Which we know isn’t what we want.

Girls should speak softly and not cause trouble is another question my daughter and I felt conflicted about.

No they shouldn’t have to speak softly all the time. I don’t. She doesn’t. A little more soft-talking and a little less yelling wouldn’t kill either one of us.

But no one should “cause trouble”, is how we both felt like answering.

I get the question – because I have 2 decades of feminist theory behind me and I’ve been told I’m “causing trouble” for verbalizing the same concerns any man would have plenty of times – but the question shouldn’t be designed for me.

Basically I thought the implications of the question was out of context for children.

That said, I found the study enlightening. It tied together a pervasive feminine theme that needs to be stamped out immediately.