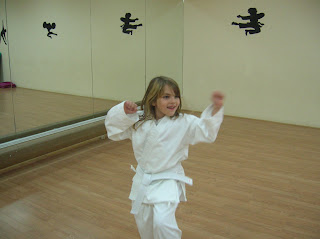 Does it strike anyone else as odd that girls and women are most commonly attacked by both strangers and significant others – but least likely to be taught self-defense?

The more I think about it, it’s not just odd, it’s absurd.

I think my daughter is most empowered if she is learning how to protect and defend her own body versus jumping up and down cheering for the athletic excellence of the boys playing football.

I’ve got Ainsley taking a Taekwondo class and I can’t say enough about the benefits.

It’s completely gender neutral, a sport where girls are as likely to excel as boys and instructors are both men and women.

It’s focused on discipline and respect, which I find useful as a parent who struggles to get my kids to obey.

It’s centered around personal excellence. In other words, you aren’t necessarily competing with other athletes as much as you are trying to push your own self to the next belt level.

It is confidence building in that she’s learning something new and achieving levels of excellence.

I think she’ll carry her physical body in a more assertive way. Studies have shown that girls tend to try to disappear or shrink as they get older, feeling less worthy of taking up physical space. I hope Karate will make her feel entitled to all the space she wants.

Also I hope it will make her feel her body is a source of action and strength instead of a just an ornament meant to look pretty for male approval.

They are encouraged to use their voices and their bodies to defend their own persons. Like any parent my worst fear revolves around someone feeling they have a right to physically over-power my daughter and attack her. I hope that Taekwondo will improve her chances of escape and survival should that happen.

I recently started taking a kick-boxing class and I think it’s the first time I’ve been given carte blanc to be physically aggressive. It feels good. It feels powerful. It feels a forbidden to me. I want Ainsley to know the feeling of aggression, which I assume is familiar to boys and men, and be okay with it.

At the very least I hope it will instill an identity as confident and strong person, as opposed to a physically weak victim.

Also, it’s very reasonably priced at only $15 a month for 8 classes.