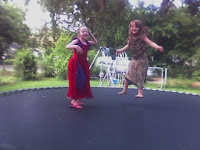 By Tracee Sioux
Just who is running the school clothes fashion show?

A reader’s (Janet) comment on my column Kindergarten Fashion Show really provided some clarity about who is driving the fashion show in elementary school. Mommy, obviously.

Mean Girls are driving the whole thing. But, its Second Generation Mean Girls now. Its the Mean Girls in our memory actually. Now that weve become mothers were trying to heal our own fashion wounds through our daughters. Or if you were the Mean Girl, perhaps youre afraid your own Karma will work itself out on your kid. Perhaps youve developed a new empathy, or you just want to make sure your kid becomes a Mean Girl versus a picked-on Dork.

Mothers are really the only ones in the family ecosystem with enough power to drive the whole thing. Little girls can have a sense of taste and style of their own, my daughter certainly does. Yet, they dont have jobs and therefore no money to make any actual decisions about what they wear. Dads couldnt care less. Nor could they be trusted with something so important. It is also the mother who will be judged if her children look sloppy, unclean or trampy. Duh, all mothers know this. We take this seriously.

All perspective about the importance of a child’s clothing is lost by Kindergarten. Which is why I feel like Im sending my daughter into some hot bed of fashionistas in September. But, I now realize its not those innocent little five-year-olds. Its their mothers.

I have had many in-depth conversations about the issue of kids clothes with women and every single conversation goes back to the mothers empathy for her child. She remembers what it felt like to be wrong, out of place, not cool enough, not pretty enough, not stylish enough.

I have yet to meet a woman, whether she had been a Mean Girl herself or not, who hasnt considered the issue in depth. It would seem parentally irresponsible not to consider the feelings of our children when it comes to clothing.

Wouldnt it? Wait, what? Is the assumption that our parents just didnt give a crap? Or that they didnt understand? Or that they didnt even know we were tortured at school for not having the Guess Jeans or the Swatch Watch? Were they that oblivious to our reality? Is it even possible they didn’t know Gloria Vanderbilt jeans could make or break us?
I think the answer is in disposable income. Our grandmothers had none and went to school in dresses made of feed sacks and dealt with it. Our parents had some, but the importance of school clothes never took the place of a retirement plan. My parents, I called and asked, said they had a budget and weren’t going to put the overall picture in jeopardy by paying twice the jeans budget. My dad then recalled that he bought his own clothes in junior high because he had a job by then. I probably should have been grateful that I didn’t have to ride my bike three miles to wash dishes in a Chinese restaurant like he did. But, I just didn’t have that kind of perspective yet.
Today I know a ton of parents who willy nilly charge school clothes on credit cards. The importance of the fashion show has taken on an emotional significance in their memories. It trumps a retirement plan. I can think of quite a few families who talk about being in precarious financial positions with big things like their mortgage or the failure of a business, but their 12-year-old daughters carry THE Dooney and Burke Purse. Thats just wrong.

I dont really know the answer to this dilemma yet myself. I do know this: if we try to heal our fashion wounds through our children then we will create wounds were there were none. A Second Generation Mean Girl is, I imagine, about 1,000 times meaner with more electronic weapons than the Mean Girl of my day. First Generation Mean Girl passed a note calling me a “slut,” her daughters are snapping pictures of girls in the gym locker room with their cell phone, posting them on My Space with the words, “Porn Star” and an ugly guy photoshopped in.

School uniforms would be one solution and lots of public schools are going that way. Myself, I would like to see all the mommies step back and rein it in. Maybe a national school clothes boycott would be my fantasy. But, that could have unforeseen repercussions, like economic backlash or even more viciousness from those who refuse to participate. If not a boycott of fashion all together, I would at least like to generate a discussion.

What do you think is the answer?