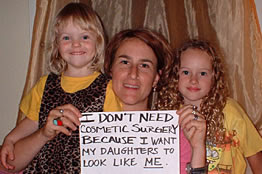 I am deeply struck by this photograph which I found on About Face, a non-profit company which combats negative images of women in the media.

Without taking a right or wrong stance about plastic surgery, this photograph of a mother and her daughters speaks volumes about what self-hatred, self-criticism and self-loathing costs the collective conscience of femininity.

Remember when we found out on Friends that Rachel had a nose job? It seemed like a kind enough thing to do for herself when she was single and a completely autonomous person. But, then she had a baby girl and the issue came up again. It was quite funny to watch her consider, “What if the baby gets my old nose?”

Funny. But, in a practical sense what if she does? What if she gets your old nose? How much harder is it to learn to love yourself if you go through life with a nose even your own mother finds unacceptable?

Who then is responsible for the daughter’s self esteem issue about her nose? While many might come back to a post like this and say, “Well, just give the daughter a nose job.” Sure, eventually. But, she has to hate her nose until it stops growing in her late teens.

My hypothesis is that it’s much more effective to learn to love our own nose, face, and breasts than to combat poor self worth in our daughters, created by our own feelings of self-loathing.

It is also notable that the feelings about my own appearance have become significantly more positive now that I can look at my daughter’s face and see the beauty there. To me, she has not one single flaw. The features she shares with me have become more attractive to me by virtue of being on her.

That said, many women will get plastic surgery to fix what they perceive as “flaws.” I don’t want to argue the moral position that you shouldn’t, certainly you have to make your own decision.

That said, I do think it’s worth asking, what then do you plan to say to your daughter if she shares the same perceived flaw?

Content on this blog is copyrighted to Tracee Sioux. Any unauthorized use of this blog or it’s content is expressly
prohibited. Please email Tracee Sioux at traceesioux@yahoo.com to obtain permission to print or reproduce these columns.http://rpc.technorati.com/rpc/ping.

CHECK OUT MY DAILY GIG @ www.blogfabulous.com

It's The ClimbSelf-Loathing Sin Bank
Scroll to top