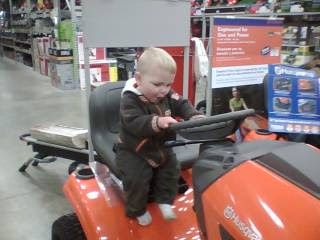 I often have to bite my tongue to prevent myself from exclaiming, Oh, Zack you’re such a boy!

It’s almost a reflex anytime he plays with machines, pushes around a car, stacks some blocks, plays with a ball or tries to fight. It’s a reflex most people in our family do not resist.

Stereotypes are ingrained in us, as much as they are in society. 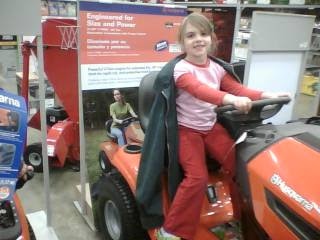 It’s the activities that are seen as masculine – but if you look to the left or right, nearly every time my girl is doing the exact same activity.

She too plays with balls, climbs on any tractor she sees, wants to drill holes in the wall or sling a hammer (like Mommy) and is as likely as he, to jump on your back and holler, You’re going down!

How do you think it feels to her when she hears Zack is such a boy! for participating in an activity she too is doing? She might feel excluded from the activity or irrelevant in the situation. Overlooked. Dismissed. Obsolete. Unimportant. Left out. Invalidated and unacknowledged.

For girls and women these are familiar feelings.

You’ll notice in the above photograph, Lowes has added women to their marketing displays for mowers. I had two simultaneous responses to this.

The first was, It’s about time they acknowledged that women also mow the lawn.

The second was, We already do 75% of the housework and childcare and now we have to mow the flippin’ lawn too? 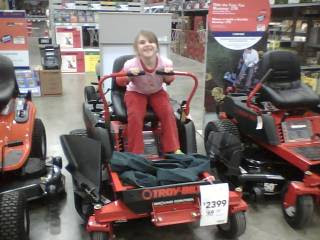 But then I was distracted by Ainsley moving to a new machine and declaring loudly, I’m going to take over the world!