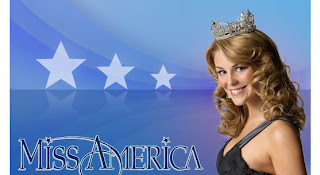 Miss America, the pageant of all pageant’s. The, the, the . . . most obsolete thing in the world.

TLC got a hold of the Miss America pageant and aims to modernize it on a reality show called Miss America Reality Check. Which sounded like a potentially promising thing. For a minute.

There was this part of me – the wicked part – that loved every minute of the tongue lashing the 52 pageant contestants got from What Not to Wear stars Stacy and Clinton. Admit it we’ve all wanted to say “enough with the sequins and take the hair down about 1,000 notches, you look like a drag queen, and for goodness sake stop it with the spray tan!”

I watched again last night (after the kids went to bed) thinking maybe they were going to move onto to some actual modernizing or dare I dream, feministing, of the pageant.

No, we had an intellectual competition. Who is the most smartest beauty pageant contestant? Host Michael Urie, the mean boy from Ugly Betty, made the girls get into their swim suits and stilettos and they were forced to {gasp} jump in the pool to ruin their make-up and hair if they got it wrong.

So, then it became just another way for women/girls to be humiliated in as little clothing as possible. And was it really a challenge of intelligence? The last winner-takes-all question was about which country Borat comes from.

Borat? That’s how we gauge intelligence in this country now? From knowing about last year’s crude comedy? Fictional geography?

Why did we give carte blanc to all gay men to humiliate women on television? Why are they allowed to be as insulting and cruel as they like without any public backlash? Were a straight man or a woman to say most of what Michael Urie says on that show it would be socially unacceptable. What makes gay guys the ultimate in fashion experts anyway? They don’t have to wear the clothes or the heals or use the products – why should women care what they think looks best on us? Why don’t we expect even a minimum of respect from them? It’s like women have become the gay man’s real-life Barbie to make-over as he sees fit.

Let’s see . . . Who has done more harm to women’s self esteem and self image -pageants or the fashion industry?

Really I would love to know – how is this better?