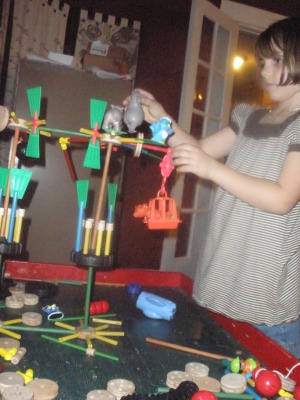 At the 2008 Women’s Conference in California Dr. Condoleezza Rice stated, “We’re not doing a good enough job of preparing girls for science and technology professions.”

Myself, I wondered – Why are we the only parents who signed our daughter up for Science Camp?

Forty years ago women made up just 3 percent of science and engineering jobs; now they make up about 20 percent. That sounds promising, until you consider that women earn 56 percent of the degrees in those fields. A recent Center for Work-Life Policy study found that 52 percent of women leave those jobs, with 63 percent saying they experienced workplace harassment and more than half believing they needed to “act like a man” in order to succeed. In the past, women dealt with that reality in two ways: some buried their femininity, while others simply gave up their techie interests to appear more feminine, state a Newsweek article, Revenge of the Nerdette, this year.

I get some solicitations from Interactive Webgames designed for girls.

Here’s the disappointing thing – their primary focus is on getting dressed, extra-curricular activities include going shopping and home decorating.

Getting dressed should take up maybe 20 minutes of a person’s day. Unless you’re actually a fashion designer or aim to become one, it really shouldn’t make up the focus of your life.

Computer literacy is now a fundamental and necessary skill and girls should be encouraged to use computer time in a more productive imaginative way.

The computer games our girls should spend their time on should have a have a broader mission. Cure cancer, invent a new kind of engine, build a new building, heal the world’s psyche, teach and learn.

For this reason I was happy to stumble on a website for children and a contest at InventNow.org. The U.S. Patent and Trademark Office has developed a game for children – both girls and boys – to introduce them to the process from inspiration to invention.

As parents of girls – we need to really encourage girls to make the fields of science and technology their own.