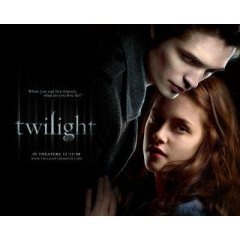 My much adored cousin told me I just HAD to read Twilight (The Twilight Saga, Book 1)

, by Stephenie Meyer, which is flying off the shelves as women indulge our addiction to the love story.

In the meantime, I’ve been contemplating a few things like why girls and women can be so self-defeating.

Why does the battered wife stay or go back?

Why are girls willing to put up with blatant disrespect for boyfriends?

Why do women and girls tend to glamorize “giving up everything” for their husbands and children?

What is wrong with us?

Women make up 50% of the population, yet we have so little of the world’s power. Why?

Edward, the beautiful vampire tells Bella, the teenage human girl, over and over that his biggest desire is to kill her. That he can barely contain himself whenever he’s around her. Her own demise only turns her on. She has zero sense of self-preservation. She “Loves” him. Within the first week of meeting Edward, who immediately treats her like crap, because he wants to harm her so badly he finds it difficult to resist, she gives up her friends, her studies, her father and her mother and all of her interests. Giving up everything is “worth it.” (Where have I heard that line before mothers?)

The answer to all those questions is – we think it’s romantic. It makes us hot. It makes us linger in the bathtub or passes the time quickly on the treadmill.

The self-defeat, the sacrifice, the giving up of self, is in our feminine collective dialogue and it’s like crack cocaine to us.

Women are addicted to this emotional drug we call “Love”, but which is really a lot more like unhealthy emotional psychosis.

It starts with the Disney Princess drama as toddlers and children.

But, then we grow up and it has no effect on us our “real life?” Right?

Then why is the Twilight Series flying off the shelves?

There’s no sex in the book (because he would crush her vulnerable and breakable body). But, really, is sex the most self-destructive thing girls participate in? I think not. I would hold up “Love,” and our distortions of it, as the most dangerous thing to girls’ confidence, their self esteem, their sense of self, their psychological and emotional health. How many girls have sex too soon for this distortion of “Love?”

Here’s the other thing that gets me about this type literary dialogue, it’s so prevalent in the collective female culture. Yet, the “give up everything” theme doesn’t exist in men’s literature.

How many relationships have actually self-destructed with these words, “But I gave up everything for you!” women/girlfriends/wives declare.

“Who asked you to? Why would you do that?” men want to know. Love is not described in the same terms, nor defined by the need for women to give up so much of themselves that they no longer actually exist, in the literary consciousness of men.

Women keep acting out the same self-destructive communication patterns and the same self-sacrificing behaviors found in books like Twilight and men are completely bewildered by it.

The only literature or culture in which this exchange – women giving up everything – shows up is in their pornography, where women aren’t featured for “LOVE” as we write it, they are featured as inanimate objects for a mere moment’s pleasure.

Stop this little cultural miscommunication and you most likely increase not only the duration, but the quality, of marriage in this country.

Stop buying into this ridiculously absurd self-defeating definition of “LOVE” and we might actually give our daughters a shot at healthy love, positive and fulfilling relationships, and enduring marriages. One where they get to keep their selves, their identities, their interests, their talents, their careers, their hobbies, their sense of self-respect and their physical safety.

The question is – can we have both?

Can we have our trashy teenage romance vampire romance novel where we “pretend” to give up our choices and our well-being, our life even, our families, for the “love of our life” who wants to kill us and flat out tells us that and then live empowering strong lives?

Or, do we hardwire our brains to believe that doing self-defeating things for a man is “romantic?” If our brains are hard wired this way, are we passing that down to our daughters? Especially if we allow them to indulge in this type of culture and media?