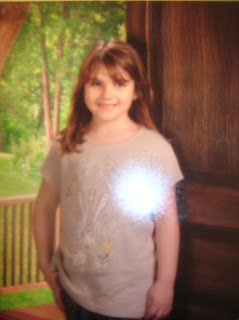 What’s the onomatopoeia for cackling at irony? I responded with that.

I’m sorry. I had no idea it was picture day. I wouldn’t have made you wear it, if I’d known. Heeheeeh HAAahhaaaHAahaha!

One of the greatest joys of mothering Ainsley has been to see what she’s going to wear.

Her translation of fashion is always ground-breaking and clever. Amusing even at it’s worst. She’ll wear an entire package of headbands at once and I’ll think, Man, I bet designers wish they had that kind of creativity because that looks fantastic. She often wears pants under skirts and it’s pretty funky cool.

I have only 3 rules

But this day, she couldn’t decide. I got fed up with her I have nothing to wear mantra and went into her closet and grabbed the first thing that went with the new pants my mother bought her.

I said something like, Who cares? It’s one day. Wear it!

I don’t care. You’re wearing it.

Considering how nonrestrictive I’ve been about her clothing choices I thought she should get over it pretty easily.

Her dilemma wasn’t really her fault either. She had sprouted up a few inches, making all her shirts too short and her pants were kind of low-riders. She couldn’t find anything to wear because she was trying to obey the modest rule.

One of the few times I pull the, “I don’t care you’re wearing it” mommy card and of course, it’s picture day. Figures.