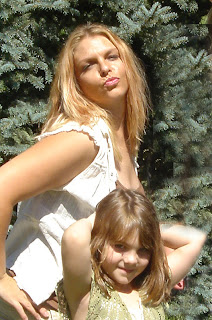 I hate that I have to admit this. I really, really do. Like you don’t even know how much it pains me to admit that . . .

My tone has become a problem. I know this because I hear my tone come out of my daughter’s mouth and that’s a problem. A really big problem.

I suppose I used to think of my tone as an effective way to make myself be heard. The problem is that it’s not really effective anymore, if it ever was. Highly questionable whether my tone has ever gotten me what I really wanted. Perhaps I was just fooling myself there.

If I could legislate my daughter’s tone, without having to admit that she’s imitating me, believe me, I would jump on that.

However, if there is one thing the last 5 years of parenting has taught me, children are fantastic mimics. If you want to know how you look to others, look at your children. If you don’t like what you see in the reflection, you have to trace it back to yourself and fix the root of the problem. Otherwise the problem just gets worse and far more out of control.

All my life I’ve heard this, You have an attitude problem.

To which, I’ve replied, if only in my own head, I have an attitude, I wouldn’t say it’s a problem.

For the past little while confronting some issues in my marriage I’ve realized that my tone goes a long way in creating the problems. To admit that takes a lot of courage because I don’t want this to construed as “a get out of jail free” card. But, tone does go a long way. Tone, I’ve realized and have had several people point out to me, is often more important than what you’re actually saying.

So, if people are only hearing the tone and not the message I’m trying to convey – well, that’s a problem. It’s ineffective.

I don’t know what the solution is. Step One, in breaking any habit, behavior or addiction is always, admit that you have a problem.

My tone is a problem. OUCH! It’s painful to admit.

I’ve got several solutions in the hopper too. The A Complaint Free World bracelet is a good reminder that I don’t have to complain about everything. (Although, it’s kind of hurting my self-esteem because I am such a failure at not complaining.) I’ve installed a Tone Turtle Bank, in the same spirit as the Self Loathing Sin Bank, on the kitchen table. The idea being that my daughter and I must deposit quarters into the banks to penalize tone usage. (The obvious problem with this penalty is that she has no job and has to get the quarters from me. So, it’s a theory in progress.)

Most importantly, I think, is that I took it to God and surrendered my anger and my tone.

Of course, as is my nasty emotional habit, I trace all my negative behaviors back to my mother – which is totally unfair as I’m 34-years-old and must be responsible for my own shit eventually, right?

Really, the fear of Karma (by which I mean, what comes around goes around and do unto others and you get back what you put out there) is getting to me. I’m totally aware that if I keep blaming my mother for all my personal crap, then my daughter will have cart blanche to blame me for everything and I’m not at all into that. I’m doing the best I can here. As I know my mother did too.

So, I took all my issues with my mother straight to God and surrendered those too.