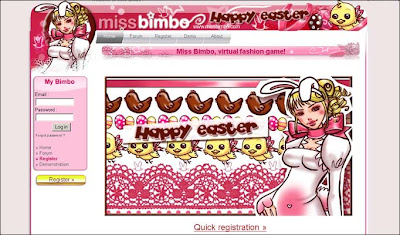 A new Internet game marketed to little girls called Miss Bimbo asks girls to compete to have the “hottest, coolest, most famous bimbo in the whole world” encourages them to “do anything” to win including pop diet pills and buy breast implants. The site originates in Europe.

Can you imagine my head exploding at this news and then the ensuing rage? What about the quiet sadness afterward as I realize this really isn’t all that surprising?

Doesn’t it sometimes seem that this the overall message message to girls anyway? You are your appearance, your sexual appeal is your value, do anything to be the best bimbo ever?

The misogynistic moron who invented this game say outraged parents – who obviously care about the message this sends to girls – are “ignoring the positive aspects” of his blatantly anti-girl website like that “girls can send their bimbo to college.”

Where I’m sure they can go to frat parties, drink too much and pass out allowing the all the frat boys to date rape them. Everyone knows college isn’t for learning – not for bimbos anyway.

“It is not a bad influence for young children. They learn to take care of their bimbos.The missions and goals are morally sound and teach children about the real world”, says Nicolas Jacquart, the creator a 23-year-old male, who obviously has a taste for young bimbos, said. The “real world” in which girls are bimbos. Right.

Really, what better way to make girls an easier lay than to convince them they’re bimbos before they even grow breasts or start their periods? Hell, it’s a wonder more parents don’t encourage their daughters to embrace their inner bimbo.

Girls are given a free taste when creating their own Miss Bimbo. But, eventually they run out of Internet money and have to send a text message for around 1.50 pounds or around $3 or add money to a paypal account so they can afford more plastic surgery.

The Guardian, a British newspaper, reports that there are already 200,000 players. France’s version has 1.2 million players.

One parent in France threatened to sue when her child ran up a 100 pound bill playing the game without his knowledge. Only one?

Because it is not illegal, or even socially unacceptable, to convince children they should be bimbos or encourage them to have plastic surgery or even be a misogynistic girl-hater, parents in the UK have taken the creators to task through the phone company, claiming they have violated laws with the text messaging money aspect of the game. Parents were encouraged to contact the phone company to file a complaint if they wanted to see the game shut down. I tried to contact them, but their contact page wasn’t working properly.

Interestingly, all my attempts to log into Miss Bimbo failed.

Perhaps the creator of this game has already been escorted into Hell where he belongs.

Watch the video of the BBC World News discussing the obvious dangers of Miss Bimbo.com.

UPDATE: This note has been added to the home page of MissBimbo.com:

Due to unforseen worldwide interest in Miss Bimbo we have had difficulty in maintaining our game in the manner players have become accustomed. We are sorry for this inconvenience and can assure you that our game will be up and running as soon as possible.

As a result of this rather surprising media attention we have decided to remove the option of purchasing diet pills from the game. We apologize to any players whom this may inconvenience but we feel in light of this weeks proceedings it is the correct action to take.

We would also like to sincerely apologise to our players for the media comparison of Miss Bimbo and Paris Hilton. We feel that this does a dis-service to the players whom send their bimbos to university, tea parties or chess tournaments.

At this time we would also like to remind players that the Miss Bimbo team assume no responsibility or liability for any fashion faux pas, hair style disasters or boob jobs incurred in real life as as a result of playing the Miss Bimbo game.

Wait, HE’S offended at being associated with Paris Hilton? Bimbos are too good for Paris?

He’s removing diet pills as a Bimbo-perfecting option but not SURGERY? Hello?!?

Oh, he’s written a disclaimer – I guess that takes care of his responsibility as a terrible and outrageous influence on our girls. NOT!