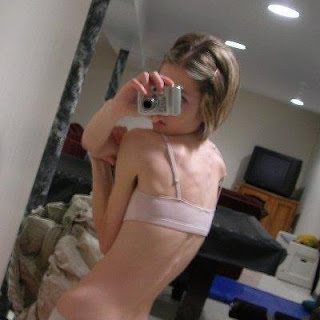 Anorexics are definitely suicidal reports a new study, to be published in Journal of Affective Disorders later in the year.

Anorexia has the highest mortality rate of any psychiatric disorder. But, it’s not because they’re starving to death – they’re actually killing themselves with other very violent means, literally.

The National Eating Disorder Association (NEDA)reports that Females between the ages of 15 and 24 are 12 times more likely to die from anorexia than all other causes of death.

That study of about 250 women suffering eating disorders showed the risk of death by suicide among by anorexic women to be as much as 57 times the expected rate of a healthy woman, according to the article in Time.

The article also looks at the drastic and violent ways anorexics use to kill themselves. They do not quietly swallow pills, as other women tend to do. The methods point to the hatred of themselves that anorexics experience.

It’s not really about a BMI. It’s about self-hatred. Physical thinness is only the manifestation of self-loathing. Self esteem isn’t just a nice thing for girls to have – it’s imperative for survival.

Visit MamaVISION for more information about the dangerous pro-ana movement sweeping the web, putting girls at risk. Mama is a former model who knows first-hand the drastic measures she took to maintain the beauty ideal. Now recovered from anorexia, she is a grass-roots fighter against the pro-ana movement.

If you haven’t heard, the “pro-ana movement” is the addictive thinking where anorexic girls defend their right to starve themselves for aesthetic appeal. They meet on public pro-ana websites to trade starvation tips, share ever more skeletal photos, pass around purging tips and support each other in keeping their mental illness.

Mama is currently chatting with Shelly, from an HBO documentary, Thin. Thin has a compelling and educational website to help people understand the addiction behind eating disorders.